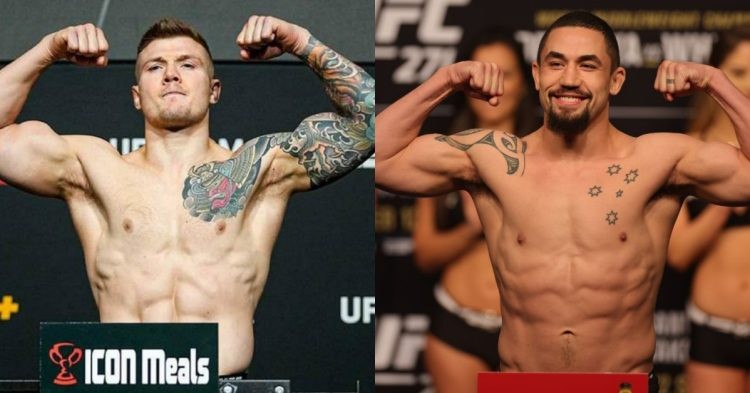 Robert Whittaker will make his UFC return at UFC Paris this weekend. Upon his return, Rob will take on Marvin Vettori in the co-main event of the night. In the main event, Frenchman Ciryl Gane will fight on his home soil and will face Tai Tuivasa. So all in all, it promises to be an amazing event.

In his last fight, Whittaker challenged Israel Adesanya for the middleweight title at UFC 271. Although he was dropped in the first round, Rob had a pretty decent fight and had some major success. But it was not enough as Adesanya ultimately ended up winning via unanimous decision. However, fans appreciated the improved performance from Rob.

Marvin Vettori also had the chance to challenge Adesanya for the belt at UFC 263. But that fight was not as competitive as their first bout in 2018. Izzy walked away with a very comfortable win. However, Marvin did bounce back in the following fight against Paulo Costa and beat him via unanimous decision.

So the excitement is very high to see the two go at it, as both are considered elite fighters in the 185lbs division. So let’s take a look at how the fight potentially to plays out.

On paper, Robert Whittaker is one of the most diverse fighters in the UFC. Not only is he an elite striker, but Whittaker is also a very decent wrestler as well. Not many fighters have taken down Israel Adesanya recently, but Rob took him down 4 times in their bout at UFC 271. It just shows how well-rounded he really is.

However, Marvin Vettori is an elite grappler as well. In his last 5 fights, Vettori has taken down his opponents 18 times! He averages 2.04 takedowns per fight with an accuracy of 45%. But he may not have an easy time taking down Whittaker who boasts a takedown defence of 83%. Rob will try his best to stick to his strength against Marvin, which is striking.

The Reaper averages a very high 4.45 strikers per minute with a strike accuracy of 42%. Although he eats 3.32 strikes per minute, Rob was a striking defence of 60%. On the other hand, Marvin Vettori lands 4.35 strikes per minute. But most of his striking involves throwing a lot of looping punches as opposed to Rob’s technical striking.

As the fans have seen before, Robert has had a lot of success against grapplers in the past. He has wins over Yoel Romero, Jared Cannonier, and Jacare Souza who are considered great grapplers. On top of having great takedown defence, Whittaker uses his jab to its best effect which keeps his opponents out of range to shoot for a takedown.

So there is no doubt that Bobby Knuckles will be highly favoured to win on Saturday. However, it will be foolish to think Vettori will have no answers to Rob’s striking. But at this moment, Robert Whittaker seems like the most likely winner on Saturday.