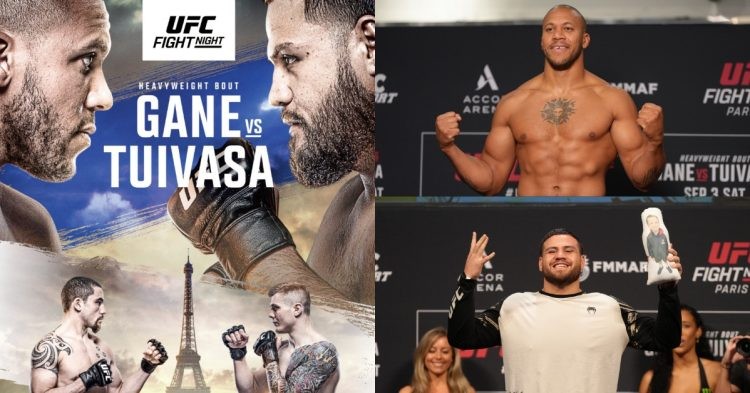 August 3rd will be a historic night as the biggest MMA promotion in the world will hold its first event in France. UFC Paris goes down this weekend and it features Ciryl Gane vs Tai Tuivasa in the headlining spot. The excitement is through the roof for the event and this card will certainly help in popularising the sport much more in the country.

Gane, who is from France, will go head to head against Australian fighter Tai Tuivasa. Although the fighters may not be well-matched in terms of skills, the bout is certainly taking place at an interesting point in their careers. Tai is currently on a 5-fight win streak heading into the fight against Gane.

Ciryl Gane, on the other hand, suffered his first career loss at UFC 270. The loss was really humbling for him as he got out-wrestled by Francis Ngannou. Hence, it will be interesting to see if it impacts his confidence or not; especially as Gane was undefeated ahead of the fight. But as mentioned before, Gane is much more skilful than Tai. So it is going to be a really entertaining fight to watch.

Quite literally a HUGE main-event at #UFCParis

Title implications for the winner, and a treat for everybody tuning in 🙌

But that’s not the only high-profile fight on the card. Former UFC middleweight champ Robert Whittaker will face Marvin Vettori in the co-main event. The bout makes sense as both of them are coming off losses to the champ Israel Adesanya recently. So a win here may earn them another crack at the champ.

Charles Jourdain will also be on the card as he faces Nathaniel Wood in a featherweight bout, which will kick off the main card. Two debutants, William Gomis and Jarmo Errens will also face off in a featherweight contest. John Makdessi will take on Nasrat Haqparast in the lightweight division.

Which songs did Ciryl Gane and Tai Tuivasa use at UFC Paris?

Tai Tuivasa is on a great run in the UFC and is about to step inside the Octagon for the biggest fight of his career so far. He is an eccentric character who loves to have fun. He has lionized shoeys in the UFC. For his last bout against Derrick Lewis, he walked out to ‘Girls Just Want to Have Fun’ by Cyndi Lauper. At UFC 269, Tuivasa made his walkout to 90s pop hit, ‘Barbie Girl’ by Aqua.

Compared to Tuivasa, Ciryl Gane is a pretty mild-mannered fighter. He faced Ngannou for the heavyweight title at UFC 270 and used ‘2 of Amerikaz Most Wanted’ by Tupac ft. Snoop Dogg for his walkout music. Before that, Gane defeated Derrick Lewis at UFC 265 to win the interim title. The 32-year-old walked out to ‘Still Tripping’ by Mike Jones ft. Slim Thug and Paul Wall for that fight.

Which songs did Robert Whittaker and Marvin Vettori use at UFC Paris?

Nicknamed The Reaper, Robert Whittaker used ‘Khe Sanh’ by Cold Chisel for his first title fight against Israel Adesanya at UFC 243. But he has chosen to use ‘Can’t be touched’ by famous boxer Roy Jones Jr since then. He has used the same song in his last 4 fights.