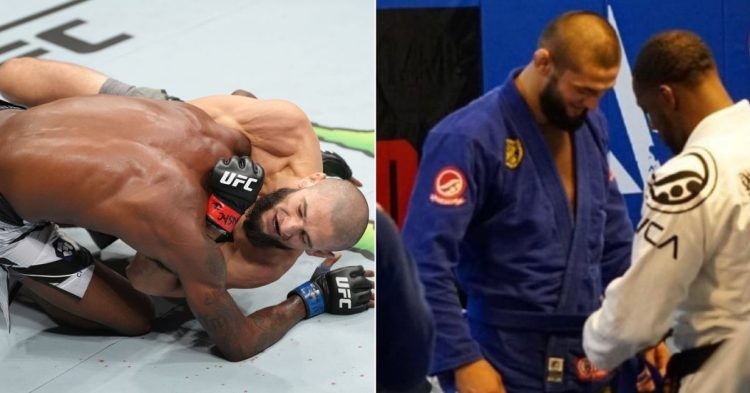 Khamzat Chimaev emerged on top after huge mayhem days before UFC 279 where he was initially scheduled to take on Nate Diaz in a five-round main event inside T-Mobile Arena in Las Vegas. After a weight debacle, Chimaev was paired opposite Kevin Holland for a middleweight bout with both the fighters co-headlining UFC 279.

What followed was a dominant outing from Chimaev who once again proved why he is well and truly the future champion we all think he is. After a three-round war against Gilbert Burns where Chimaev was booed for his performance considering he was not able to dominate the Brazilian fighter, Borz made sure he put those opinions to rest with a scintillating first-round submission win over Kevin Holland.

After the fight, Chimaev was seen having a conversation with his BJJ coach Alan ‘Finfou’ Nascimento where the duo can be seen talking about all the “fake black belts in Brazilian Jiu-Jitsu.”

“I’m making Khamzat expose all the fake black belts in Brazilian jiu-jitsu that are in the MMA scenario. Why? Because nowadays, people just get belts like they go to McDonalds. They don’t do the job. He just got this purple belt. How many black belts in his career has he finished? So that shows, that’s about it. I’m using him to expose many guys.”

It wasn’t very long ago that Chimaev was awarded the purple belt in BJJ and it’s safe to say it will be a while before he gets his hand on the coveted black belt. According to Chimaev, it will be five years before we see him don the black on his waist.

For now, Chimaev continues to steamroll his opponents, and with a submission win over black belt Kevin Holland, it’s safe to say that the Chenian star is indeed proving his superiority over black belt BJJ practitioners as a purple belt.