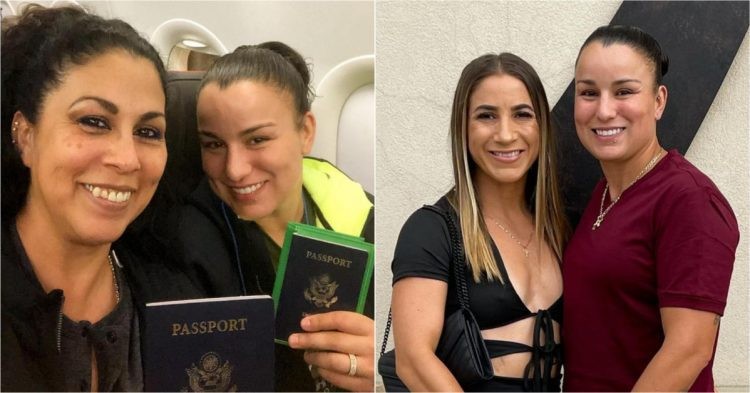 Raquel Pennington is a UFC women’s bantamweight fighter. Pennington is an amazing competitor who has some credible wins under her belt. She joined the UFC in 2013 and beat Roxanne Modafferi on her debut. Since then, Pennington has gone on to beat fighters like Aspen Ladd, Miesha Tate, Irene Aldana, and former UFC champ Jessica Andrade.

She also fought for the UFC bantamweight title against Amanda Nunes at UFC 224. However, Pennington fell short as Nunes knocked her out in the 5th round. Despite her shortcomings against Holly Holm and Nunes, Pennington has always been a fan favorite. But not just a fighter, Raquel is also a proud member of the LGBTQ community.

There are a few openly gay fighters in the UFC like Amanda Nunes and Molly McCann. Raquel Pennington is also in an open relationship with a fellow UFC fighter in the strawweight division. MMA fighters often get targeted by fans for lacking a progressive mentality. Hence, fighters like Raquel Pennington, Amanda Nunes, and the recently engaged Molly McCann stand as shining examples of inclusivity in the sport.

Raquel Pennington faced adversity after coming out as gay

Previously, UFC women’s flyweight fighter Molly McCann spoke about the challenges she faced after coming out as gay. Former UFC title challenger Raquel Pennington also faced similar adversities after she came out of the closet. In 2016, Pennington shared the story of when she opened up about her sexuality and what exactly happened afterward.

Apparently, Pennington came out pretty early in her life. Rocky revealed that her mother was already starting to get a sense of her sexuality. But on her high school graduation day, Pennington finally told her mother about how she really felt about the situation. But at first, Pennington’s mother was not ready to accept the decision. However, Raquel did not back down and stayed true to herself.

Raquel added, “I remember her saying I was disappointing and that I was disrespecting my grandparents, I was like, if anything I would’ve been disrespecting myself if I wasn’t standing up for me, so I was like you need to just learn to accept me. I think after she saw all the responses and fan mail I was getting that and all the encouraging responses, I mean I was even getting letters from people that were like 75 years old who have been in the closet their whole life and been miserable.” (h/t via Flo Combat)

However, Pennington’s mother eventually warmed up to the idea later. Her fight on The Ultimate Fighter finale was a big reason behind her mother’s change of mind. After the bout against Roxanne Modafferi at the TUF finale, Rocky got a lot of support from the fans. Ultimately that changed her mother’s mind and she accepted Raquel for how she is.

But she was also very complimentary toward the working conditions in the UFC. Whereas she had to face challenges growing up because of her sexual orientation, the veteran fighter felt very comfortable about herself in the UFC environment.

Who is Raquel Pennington’s wife?

As previously mentioned, Raquel is in a relationship with a UFC fighter and she is none other than Tecia Torres. The couple met in 2012 and started dating shortly afterward. Fans have seen them being at each other’s corners and being there for each other during the fight weeks. Pennington got engaged to Torres in 2017. However, the couple announced that they will get married in 2023 in a grand manner.

However, not only their marriage, but 2023 will also be a big year for them in terms of expanding their family as well. On December 2022, Torres announced her pregnancy. It looks like the couple is very much in love and they are committed to each other for a long time.