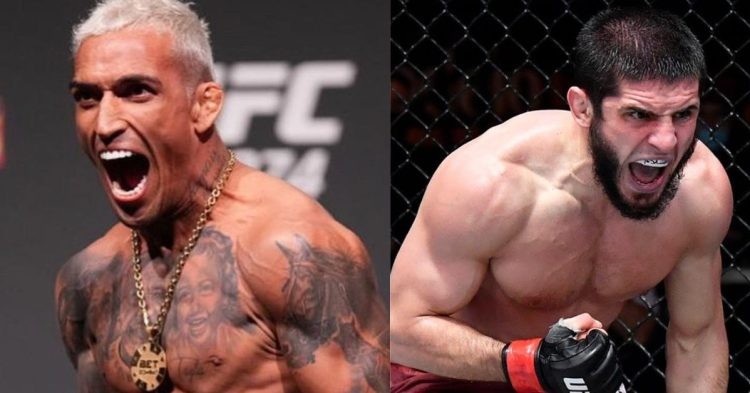 Finally, the moment for which the fight fans around the world were waiting for has arrived as UFC has officially announced the Charles Oliveira vs Islam Makhachev fight for the vacant lightweight title.

The promotion made this announcement during the ongoing UFC Long Island broadcast. This lightweight championship matchup will take place on October 22nd in the main event of UFC 280 in Abu Dhabi at the Etihad Arena.

It is needless to say that fans across the globe were waiting for this clash as both the lightweights are unarguably two of the best fighters in the division right now. Moreover, both Charles Oliveira and Islam Makhachev are on an unbelievable winning run and consequently, their winning streak will be on the line along with the lightweight title.

With that being said, Charles Oliveira will be looking to reclaim his belt after getting stripped due to missing weight ahead of his title defense against Justin Gaethje at UFC 274.

Despite suffering a big blow in the build-up, Do Bronx continued his dominance in the division as he submitted The Highlight via rear naked choke in the first round. On the other hand, Makhachev who was supposed to face Beneil Dariush in his last fight had to face Bobby Green at the last minute as Beneil suffered an unfortunate injury.

In this matchup, the Russian lightweight dominated Green with his wrestling and finished the fight with a barrage of ground and pound strikes to extend his streak to ten wins.

As mentioned earlier, Charles Oliveira lost his lightweight title due to missing weight and consequently, this upcoming vacant title matchup between him and Islam Makhachev will determine the new lightweight champion.

After Do Bronx’s dominance at UFC 274, many fans and fighters were leaning toward him as the greatest lightweight fighter of all time. However, former champion Khabib Nurmagomedov disagrees with those claims and believes that Oliveira has to first become the undisputed champion and he will only earn that status after defeating Islam Makhachev.

Oliveira has defeated almost every top lightweight fighter in the division and for his recent wins over big superstars Dustin Poirier and Justin Gaethje, the Brazilian lightweight has been awarded as ESPY’s best MMA fighter of 2022.

Now he faces another tough challenge in the form of Makhachev who is on an excellent winning run and many expect the Russian to outshine Oliveira in their upcoming matchup. If Do Bronx manages to outclass Islam in this vacant lightweight title fight then the argument of him entering the conversation of the greatest lightweight fighter of all time will intensify.

Yair Rodriguez’s UFC Fight Purse: How Much Money Has El Pantera Earned in His UFC Career?