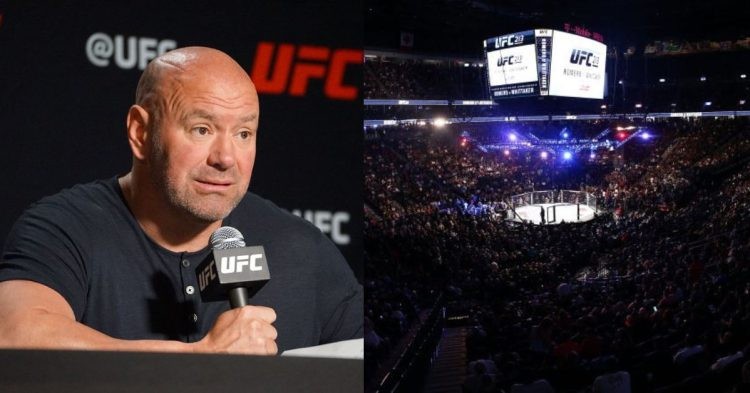 UFC will not host any fight event in the last week of November (Credit: Twitter)

With only a month left before the next year begins, the UFC will host three more events – which are two fight nights and a final PPV, UFC 282. However, the fight fans will be disheartened to know that the promotion will not host any event in the last week of November.

The last two events were UFC Fight Night and UFC 281. The PPV was an absolute banger, with most stoppage wins and memorable fights. Most notably, Israel Adesanya was dethroned after he got stopped by Alex Pereira.

Other than that, the last few months were huge championship upsets as undefeated champs Kamaru Usman and Adesanya got dethroned. UFC 280 was another memorable PPV where the main event lived up to the hype and Khabib Nurmagomedov’s protégé, Islam Makhachev became the new lightweight champion after submitting Charles Oliveira.

After an incredible series of events, the promotion will return next weekend with a fight night which will be headlined by Stephen Thompson and Kevin Holland. Then we have UFC 282 and another fight night.

Ready to close out 2022 with Jared Cannonier vs Sean Strickland 💥

There will be no events in the last week of December as the promotion will take a break for Christmas and other holidays.

Schedule for UFC Next Events

UFC will return next month with a fight night which takes place on 3rd Dec in Orlando. The main card will feature Stephen Thompson vs. Kevin Holland, Bryan Barberena vs. Rafael dos Anjos, and Matheus Nicolau vs. Matt Schnell.

After that, the promotion will be headed to the last PPV of this year, UFC 282 which takes place on 10th Dec at T-Mobile Arena, Las Vegas. It will feature a light heavyweight title fight between Jan Blachowicz and Magomed Ankalaev, an exciting battle between the fan favorite Paddy Pimblett and Jared Gordon, the veteran Robbie Lawler vs. Santiago Ponzinibbio, and Darren Till vs. Dricus du Plessis.

I am very disappointed to announce that I will not be defending my belt at UFC 282. I was injured in training in Las Vegas while finishing my preparation for my title defense in the UFC’s lightheavyweight division. pic.twitter.com/0KUEBZVPuK

Instead, now the fight fans will see the main event bout between Jan Blachowicz and Magomed Ankalaev for the vacant light heavyweight title. Check out the upcoming UFC schedule below:

The last fight event, UFC Fight Night 216 will be held on 17th December at UFC Apex, Las Vegas. It will feature Jared Cannonier vs. Sean Strickland, Alex Caceres vs. Julian Erosa, and Jake Matthews vs. Matthew Semelsberger in the main card.