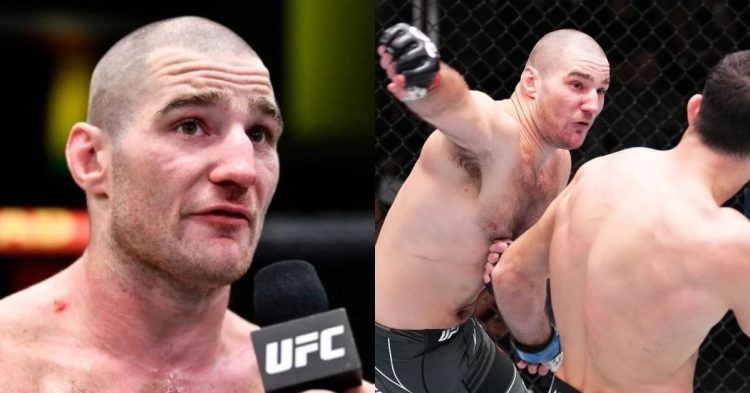 Currently, Sean Strickland is the #7 rank contender in the UFC Middleweight division. Also known as, “Tarzan”, he is regarded as one of the most prominent and outspoken fighters in his division.

Although he made a very average start in the UFC, Sean (26-5) has always had the potential to become one of the best in his division. However, the American has seen some tough results, most recently against Alex Pereira and Jared Cannonier.

Despite his back-to-back losses, Sean has done well to get back on track after beating Nassourdine Imavov. Moreover, he has done so after stepping in on short notice as well. With his latest victory, Strickland will get the necessary boost and motivation to once again aim for the top of the division.

Known for his stamina, endurance, and brash personality, Sean made good money from his UFC fights. As such, let’s examine Sean Strickland’s UFC career earnings through salary, purse, payouts, bonuses, and incentive pay.

The 31-year-old made his UFC debut at UFC 171 on March 15, 2014, facing Bubba McDaniel. On the night, Sean won the fight via rear-naked choke submission in Round 1. As such, Strickland would then go on to defeat several elite and veteran MMA athletes such as Court McGee, Jack Marshman, Brendan Allen, Uriah Hall, and more.

Interestingly, Sean also took on the former welterweight champ, Kamaru Usman, during his stint in the welterweight division. Unfortunately, it was not Strickland’s night as he lost the bout via unanimous decision. Other losses during his welterweight run include Santiago Ponzinibbio and Elizeu Zaleski dos Santos.

Since making his move up to Middleweight, Sean was in impeccable form. As such, he would go on a five-fight win streak before a brutal halt by Alex Pereira. In his next fight, Strickland gave his all but was edged out by Jared Cannonier in an extremely close fight. Most recently, Strickland replaced Kelvin Gastelum on short notice and went on to beat up and comer Nassourdine Imavov via Unanimous Decision.

According to sources, Strickland made $321,000 for stepping in on short notice to beat Imavov. As such, it is Strickland’s biggest UFC payout to date.

Here are some other notable payouts of Strickland:

With his latest victory against Nassourdine Imavov at UFC Vegas 67, you can expect Sean to take on tougher opponents and increase his career earnings in the UFC even further.