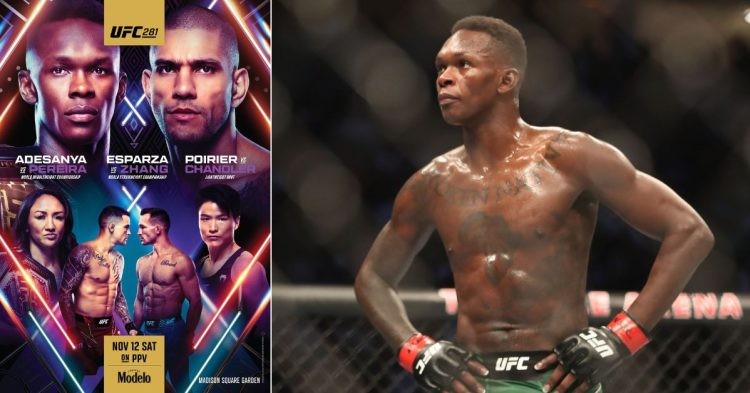 We are less than ten days away from one of the most anticipated UFC PPVs of this year as Israel Adesanya takes on arguably the biggest challenge of his career in the form of archrival Alex Pereira on November 12 inside Madison Square Garden, New York at UFC 281.

A Twitter user by the name of Aj decided to take matters into his own hands and posted his version of the UFC 281 trailer. Surprisingly enough, it was every bit of what fans expected from the UFC. Some users went on to say that UFC should hire him, while others were left impressed by the crafty work.

No ufc 281 trailer? Fine I’ll do it myself. pic.twitter.com/gI0Tzlsg7V

This is actually good 🔥

Also UFC should pay you for this. It’s MAJESTIC💪🥂

It won’t be wrong to say that there has been a lack of proper marketing for the event, considering we are less than ten days away from the event. There has been no teaser/promo or trailer for UFC 281, and fans aren’t too happy about it.

Almost a month ago, Israel Adesanya also dropped the trailer for UFC 281 on his official YouTube channel much to the surprise of fight fans around the world. To put things in perspective, the official trailer for UFC 280: Charles Oliveira vs Islam Makhachev dropped on September 14, more than a month before the actual PPV took place on 22 October.

Be that as it may, it’s important to note that UFC has released the preview for the main event, co-main event, and the fight between Poirier and Chandler on their social media platform. It’s only their YouTube channel that is missing a UFC 281 “official trailer”.

UFC 281 features an exciting card. Dan Hooker will open the main card as he returns to the lightweight division after a disappointing outing in his featherweight debut. He will take on Claudio Puelles. Following the lightweight bout, Frankie Edgar will step inside the Octagon for the last time in his career after confirming his retirement at UFC 281. The UFC legend will take on Chris Gutierrez, finishing his career in the bantamweight division.

Dustin Poirier will also return to action to take on Michael Chandler in what promises to be a barnburner. In the co-main event of the evening, Carla Esparza will defend her strawweight gold against Weili Zhang.

In the main event, former kickboxing rivals will come face to face inside the UFC Octagon as Israel Adesanya put his middleweight gold on the lines against the Brazilian Alex Periera.

How excited are you for UFC 281? Do let us know in the comments section.