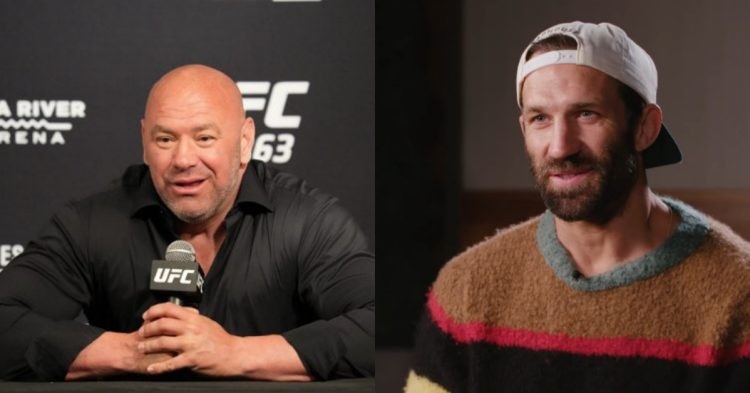 Former UFC middleweight champion Luke Rockhold will be back in action this weekend. He will go head to head against Paulo Costa at UFC 278. He seems to be fired up for the event and Luke has put everyone on notice, including the UFC. Rockhold ripped into the promotion and called out Dana White on how the UFC President is running the show.

The 37-year-old still wants to compete at the highest level of the sport. Hence, Luke still wants to be a part of the company as he believes UFC is still the best promotion in the world where the best regularly fight the best. However, He is not afraid to call out the promotion when he feels all of his complaints are fully “justified.”

“I’m here to fight. I’m not saying anything that’s not real. Everything I’m saying is justified and truthful. Just because I should be in a position of power before I say this sh*t? F**k off! I got nothing to lose. I don’t need this business.”

So what are his complaints? One of the main complaints that Luke is upset about is the amount of money that UFC fighters are making. He is not happy with the $50,000 bonus. Luke reminded the fans about times when fighters used to make $100,000 in bonuses. Instead of increasing the amount, the company has stuck with the fixed sum of $50k.

Rockhold has mainly blamed Dana White for the low fighter pay. He stated that White has oppressed the fighter pay from increasing since ZUFFA sold the company in 2016. UFC is generating record revenue year after year, however, that has not been reflected in fighter pay.

“When Lorenzo and Frank were running the show, there were real grounding wires. These guys, they don’t know what they’re doing. They’re letting Dana just run the show and suppress the sport. They need to grow, this whole f***ing thing needs to grow together.”

But not just the company, Luke did not shy away from calling out his fellow fighters either. Although superstars like Francis Ngannou and Jon Jones have spoken up about their low earnings, not enough fighters took a hard stance on the fighter pay issue. Rockhold stated that they are afraid of the company.

“I’m just not gonna be scared to say it. Everyone wants to f***ing (keep quiet) because they want to get that title shot, they wanna move up, I’ve f***ing done it all.”

Luke’s comments have sent shock waves through the MMA community. The UFC also took notice of it and they have taken action as well. Although all other fighters’ interviews have been uploaded on UFC’s official YouTube channel, unsurprisingly, the company has decided not to upload Luke’s interview on their channel.

Will the UFC cut Luke Rockhold if he loses at UFC 278?

The fight between Luke Rockhold and Paulo Costa is going to be intriguing in so many ways. Not only the fight is going to be a blockbuster one, but the outside circumstances are also making this a must-see event. Much like Luke, Paulo is also unhappy in the UFC. The Eraser revealed that he will not be opposed to exploring free agency once his contract expires.

So it will be very interesting to see what UFC does with them after UFC 278. While the winner may remain with the UFC, the loser will be in an interesting spot. If Luke comes out on the wrong end of the result, the UFC may very well cut the veteran fighter, especially after his rant on them.