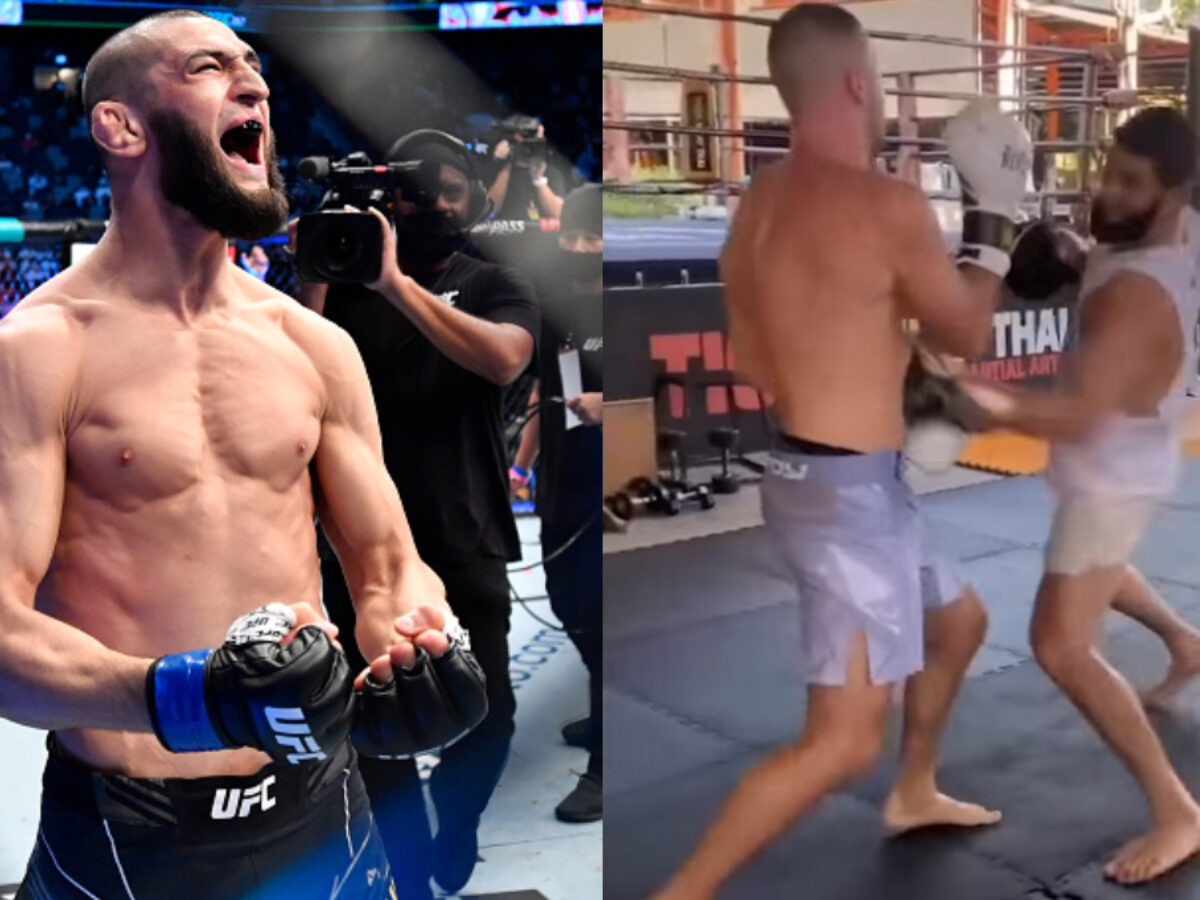 Khamzat Chimaev is a born fighter. He always takes a challenge regardless of the place or the outcome. The ‘Borz’ has the “smash everyone, kill everybody” mentality that made him such a fan favorite.

Chimaev has won 4 out of 4 fights in the UFC so far, each of them with stoppages. His last victory came against Li Jingliang. He is scheduled to face Gilbert Burns at UFC 273 on April 9 for his next fight.

The Chechen has been fighting from day 1. He is viewed as a stalwart in the Allstars Training Center in Sweden. In a recent interview ‘Borz’ explained how it played out:

“I was boxing, sparring, and was doing good sparring with the guys. There was water on the mats, I just [slipped] on one knee and he still punched me. I go up and start to fight him. I took off my gloves and kicked his ass, took him down.”

“Nobody knows me here and the guys were together. One guy was screaming, ‘Oh, f*ck him,’ like bad things. And I said, ‘Okay, guys come on. We’ll go to the bathroom.”, He added.

Khamzat was boxing and sparring with the guys over there where things took a wrong turn. But fortunately, no one took Chimaev’s offer to fight in the bathroom.

The gym owner got into the scene shortly and everybody was separated. His journey began right there when he told the gym owner about his desire to be a pro-MMA fighter.

The rise of Khamzat Chimaev in the UFC

Khamzat Chimaev has terrorized two divisions so far in the UFC. He made his debut in the Middleweight division against John Phillips earning a dominant victory with a 2nd-round submission.

However, he did not stop there. The ‘Borz’ took a fight on the very next card within 10 days. The Chechen fighter faced Rhys McKee in the welterweight division and knocked him out in the very first round.

At this point, the hype was already building around him. His ability to fight in two weight classes and finish both in a dominating fashion earned him a lot of fans. But other than his impressive career as a pro-MMA fighter, he has other aspects in different martial arts as well.

Chimaev’s athletic talents were apparent from his childhood, and his decision to venture into the MMA world allowed him to flourish. Khamzat has 3 gold medals in two weight classes in his wrestling career.

Not only does he implements his superior ground skills during the MMA fights, but Khamzat is still a beast when it comes to pure wrestling. That was proved when he took on a wrestling match against UFC middleweight fighter Jack Hermansson. He pinned Hermansson down without any trouble.

Other than being an accomplished freestyle wrestler, Khamzat Chimaev is also a Brazilian Jiu-jitsu purple belt. Other than that, Khamzat has also competed in several Judo competitions as well.

‘The Borz’ also went to Thailand to hone his Muay Thai skills at the renowned Tiger Muay Thai gym. Recently he has been training with Darren Till ahead of his fight with Gilbert Burns at UFC 273.

A victory over Burns will surely guarantee a title shot against the champion, Kamaru Usman. With Usman having fought almost every ranked opponent, it will certainly be an intriguing matchup.