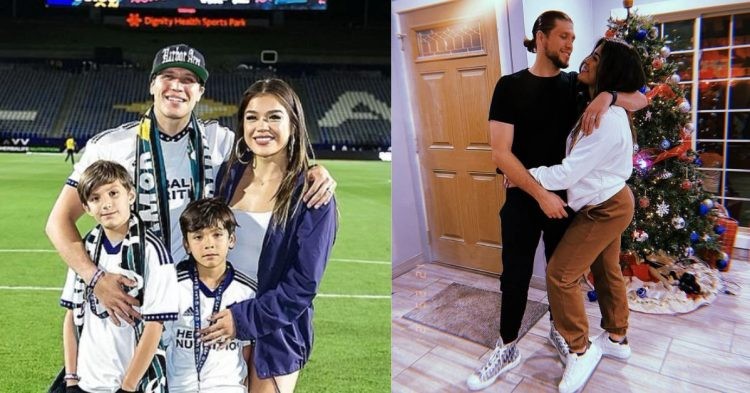 Brian Ortega and Tracy Cortez have seemingly split after being together for 2 years. The UFC power couple began dating after Ortega approached Cortez on Instagram, commenting on one of her posts. This caught her attention and they were soon spotted together by fans. However, it is not clear exactly when the pair began their relationship.

The pair then soon began making appearances together both in public and on social media. They were also seen romancing on the UFC’s Embedded Series. Ahead of Ortega’s savage war against Alexander Volkanovski at UFC 266, Cortez posted a telling picture.

And Tracy changed her instagram name back to Tracy R. Cortez, before it was Tracy R. Ortega

In it, she was standing alongside T-City who was in his fight trunks. Cortez was seen sporting an engagement ring on her left hand, indicative of a potential engagement. She later confirmed it with her reply to Laura Sanko’s comment.

However, Cortez and Ortega both recently removed all pictures of the other from their respective social media. And Tracy’s profile name, which was Tracy R. Ortega earlier, was changed to Tracy R. Cortez. Twitter user Sabatello and Poirier Stan pointed out these facts which sent fight fans into a meltdown. Soon rumors of their breakup took over the MMA twitter-verse as fans had a multitude of different reactions to this news.

Did a relationship with Tracy Cortez distract Brian Ortega from his UFC career?

Both Brian Ortega and Tracy Cortez are elite fighters in their divisions. T-City first made his UFC debut in 2014. His first fight against Mike de la Torre ended in controversy after Ortega tested positive for PEDs. His first-round submission victory was overturned to a no-contest and Brian was fined $2,500 and received a 9-month suspension. Despite this horrid first impression, Ortega managed to turn things around.

He went on a 6-fight win streak beating the likes of Frankie Edgar and Cub Swanson among others to earn a title shot.

However, he was decimated on the feet by Max Holloway who set a record for the most significant strikes landed in UFC history during that fight. Ortega then began dating Cortez sometime in 2020. And since, he has gone 1-2 in his last 3 fights. He defeated the Korean Zombie in October 2020 after a 2-year layoff.

After his engagement was revealed by Cortez, he went the distance in yet another brutal title challenge. This time against current P4P #1 Alexander Volkanovski. Ortega once talked to Schmo about his relationship with Tracy Cortez and whether it had affected his MMA career and training camps.

Ortega said, “I love her, the coaches now see that, I think that hey respect it, they understand and they know as long as we stay out of each other’s way when it comes to different camps and stuff like that it will be alright.”

T-City seems adamant that this relationship hasn’t affected his performances in the octagon. And Cortez is undefeated in the UFC after receiving her contract from Dana White’s Contender Series. However, only time will tell whether their split has any impact on either fighter’s career.