A loving Dad and husband, A brave firefighter, and The Baddest Man on the planet, Stipe Miocic is one of the most accomplished fighters on the planet.

Throughout his glorious UFC career, Stipe Miocic has beaten legends such as Daniel Cormier, Fabricio Werdum, Junior Dos Santos, Alistair Overeem, and so on. Miocic might be a complex puzzle inside the UFC octagon, but he likes to live a simple life when he is not fighting savages inside the octagon.

The greatest heavyweight of all time does not spend a lavish lifestyle when compared to other UFC stars such as Conor McGregor or Khabib Nurmagomedov. Miocic prefers a simple yet meaningful lifestyle and it’s very likely the attitude he goes with while getting his body inked.

Stipe Miocic has three tattoos on his body, which symbolize certain valuable things in his life. Let’s take a look at all the tattoos of Stipe Miocic and the meaning behind them.

Chinese Letters on his Back

The UFC heavyweight champion has a Chinese calligraphy tattoo on his back. This tattoo symbolizes his gym “Strong Style Fight Team”. Miocic’s journey in UFC has been nothing but spectacular. However, that would not have been possible if it wasn’t for his longtime coaches Marcus A. Marinelli (Head coach), Joe Delguyd (Boxing coach), Bobby Kaleal( Strength and conditioning coach), Steve Kinas(Grappling coach). 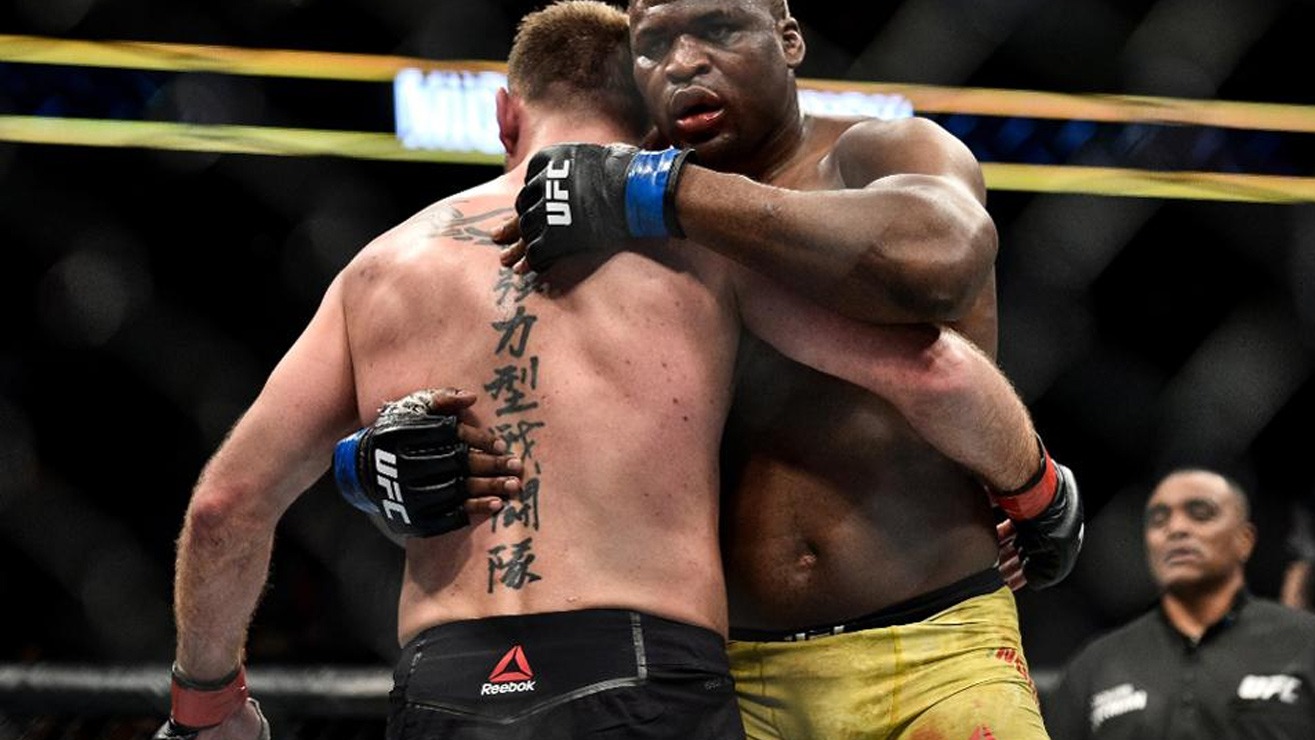 Though he is a nightmare for his opponents inside the octagon Miocic is a gentle giant in real life. He does not shy away from goofing around to have fun with his friends and family members. And cherish the contribution from his coaches and team, Miocic walks around with a tattoo of his gym.

Besides Miocic, UFC star Conor McGregor has also a Gorilla tattoo on his chest that symbolizes his gym SBG, where he started his legendary MMA journey.

Favorite Tattoo of Stipe Miocic: “Croatian Coat of Arms” on the Foot

Stipe Miocic has a tattoo symbolizing the Coat of arms of the Republic of Croatia on his feet. The Croatian Coat of Arms has one main shield. There are five small shields that crown over the main shield. The main coat is a checkboard that has 13 red and 12 white fields. It’s also known as “šahovnica”. Miocic got this tattoo done in 2016 by the artist, Ajmoo Hrvatska.

There is no denying the fact that Stipe Miocic is proud of his Croatian heritage. Though he has managed to achieve the stardom that many can only wish for he has stayed true to his roots throughout the years. Talking about how proud he is of his heritage, Miocic once said:

“I use every opportunity to highlight it and I am proud of it. After all, that is one of the reasons why I have asked American journalists and television reporters to accurately pronounce my name and surname, and not say it like “Majosik” or something,”

Stipe Miocic inked a Family Crest tattoo on the back of his right leg in 2014. This symbolizes a families value and identity. Miocic is married to Ryan Marie Carney and has a daughter. Miocic’s Croatian roots bring him more every time when he steps into the octagon and sees fans in Croatian jersey cheering for him. Miocic once confessed:

“Every time I fight and I come out and see a bunch of Croatian cheeker jerseys it’s overwhelming,”

Stipe Miocic has achieved unprecedented success in his MMA career. He is widely considered the greatest heavyweight of all time. He is one of the most popular fighters in UFC. The fans might already know everything about him. However, his tattoos offer a unique look to his fans, A champion who values the people around him.