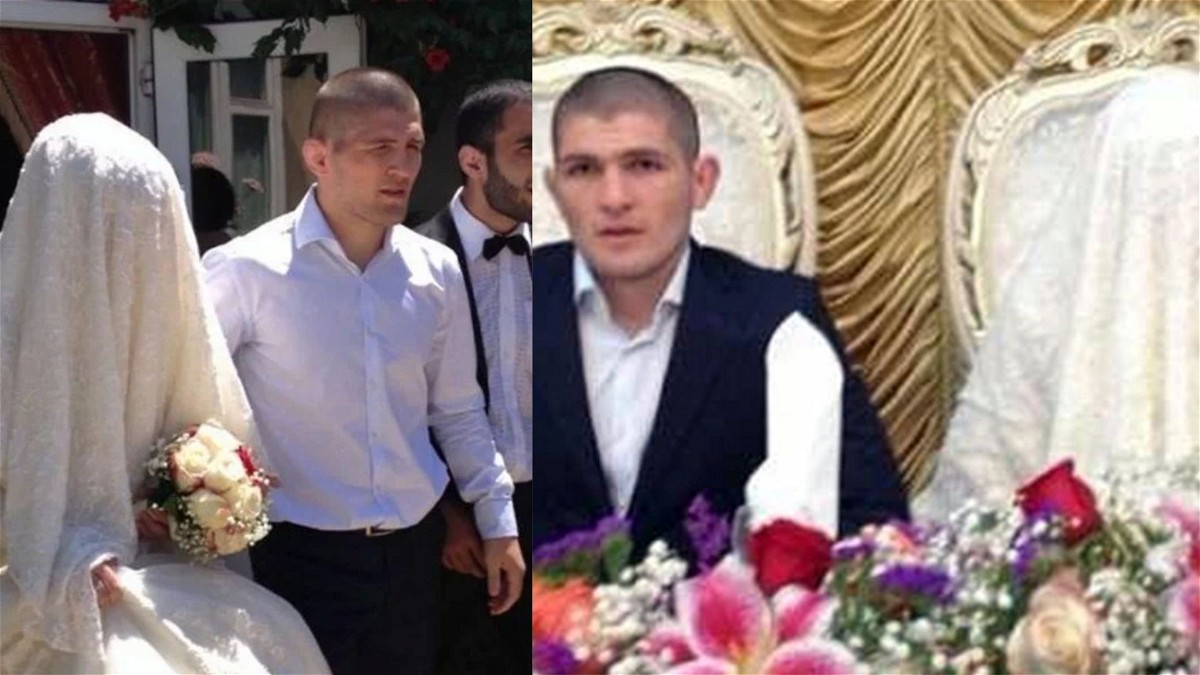 It’s safe to say there will never be another Khabib Nurmagomedov in the MMA world. The Dagestani fighter’s dominance inside the octagon is unparalleled. He continues to be the undisputed UFC Lightweight Champion of the world, with notable victories over former Champions including the likes of Rafael dos Anjos, Dustin Poirier, and Conor McGregor.

Nurmagomedov likes to keep his professional and personal life away from each other, and unlike many of us, Khabib Nurmagomedov manages to do it really well.

Little is known about Nurmagomedov’s personal life, and while his relationship with his father and coach late Abdulmanp Nurmagomedov is known by many, we have only rarely seen Khabib talking about his family, his wife, and his children.

Recently, Khabib announced that he would serve as the global ambassador for a new MMA promotion, MMA Global, and is aiming early 2020 to hold the first-ever event in Florida, Unites States.

Khabib has stated that he wants to contribute to society, and is looking to giving employment to people in the excess of over 250 with his new projects and ventures.

Khabib’s training videos with Daniel Cormier and his occasional outing with fellow Dagestani fighters and other UFC stars are available online, there’s not much known about his life outside of the MMA world.

Khabib Nurmagomedov likes to lead a private life and doesn’t like to flaunt his riches or his exuberant lifestyle on social media. Despite a reported net worth of excess of $100 million, Khabib remains humble and there’s only little one can figure out from his social media about his financial success.

Born to a small village called Sildi in Tsumadinsky, Dagestan in Russia, Khabib started training at an early age. With videos of a young Khabib training with a bear, Khabib’s father Abdulmanap Nurmagomedov turned his ground floor into a training gym after they moved to Kirovaul. Nurmagomedov also trained in judo and combat sambo from an early age.

Speaking to a Russian daily, Khabib talked about his childhood. The current undisputed lightweight Champion of the world grew up with his 15 brothers and lived in the same place.

He revealed that every morning Abdulmanap Nurmagomedov would force him and his brothers to train. Khabib started learning early, and with his father as his trainer, he would go on to scale the heights of mixed martial arts.

Nurmagomedov like every Dagestani started training at a very young age and used to be involved in street fights and brawls growing up. Nurmagomedov maintains that he has lived a tough life and has often criticized American fighters for bringing up street fighting during the trash-talk leading to a fight inside the UFC octagon.

According to Khabib’s father, the wedding ceremony hosted more than 4000 people with visitors congratulating the Nurmagomedov family throughout the day of the marriage. It is believed that the wedding venue had a total capacity of 1200 visitors.

Also Read: “Everything Was Completely Different Without My Father”- Khabib Nurmagomedov Gets Emotional Talking About His Retirement

Nurmagomedov’s family had to switch the ceremony three times to let everyone in and congratulate Khabib Nurmagomedov and Patimat Nurmagomedova. According to a news outlet, the cost of the wedding was paid by family friends and it was reported to be 700,000 rubles or roughly $10k.

At the time of his death, Abdulmanap Nurmagomedov has married two women, and it is common in Khabib’s family to have two wives with most of his family members having their second marriage during their 50’s -60’s. Khabib’s grandfather also had two wives.

Also Read: UFC Hall of Famer Has a Fascinating Insight on Conor Mcgregor vs Khabib Nurmagomedov

Patimat Nurmagomedova was born in Sildi, the same village the Khabib Nurmagomedov was born and raised. Both Khabib and Patimat were friends growing up. Patimat and Khabib attended the same school for one year and found his soulmate at a very young age. Khabib would part from Patimat after moving to Makhachkala to become one of the greatest mixed martial artists of all time.

In an interview given to the Russian outlet Sports Express, Khabib’s father Abdulamanap revealed that Khabib is married to his distant relative and that Patimat did not get the name Nurmagomedova after the marriage.

Not much is known about Patimat Nurmagomedova. There are no photos, and Khabib continues to remain private about his family life. In the past, several women have been linked to being Khabib’s wife, with the most notable being Olga Buzov, a popular Russian pop artist and TV host.

Khabib was captured alongside Olga Buzov spreading a rumor that she was Khabib’s wife. Khabib has never posted photos of his wife, kids anywhere on social media. There only a few photos of Khabib with his wife Patimat.

There is one photo of Patimat with a covered face during a ceremony and others including Khabib with his kids and in what appears to be a wedding ceremony.

It is believed that after moving to Dagestan, at the age of 22, Nurmagomedov came to decision and sent his parents to talk to Patimat about the marriage. As fate would have it, Patimat was chosen and the couple got married in 2013 in their hometown of Dagestan in Russia. Nurmagomedov has stated multiple times in the past that he wishes to keep his personal life separate and away from the media.

Earlier, Khabib’s father stated that to pay respect to his religion, each of the members of the Nurmagomedov family has had multiple marriages. It could be possible that Khabib could marry once again at some point in the future.

Khabib Nurmagomedov and his love for kids

Khabib Nurmagomedov never talks about his kids. A private man, Khabib welcomed his third kid late last year after Abdulmanap Nurmagomedov revealed in August that Khabib is expecting his third child. Khabib’s third child was born on December 22 of 2019. The second boy in the family, Khabib’s father revealed that he was named Husayn Nurmagomedov after one of Khabib’s uncle.

The daughter’s name is Fatima Nurmagomedova, while the boy is named after Khabib’s great-grandfather Magomed Nurmagomedov. Talking about whether or not he wants his kids to follow his footsteps into the world of mixed martial arts, Khabib said.

In the past, Khabib decided to pull out of his much-anticipated showdown against Tony Ferguson at UFC 249 citing health precautions for his family and kids. Khabib is an ambassador of the sport and continues to interact with the young generation through various mediums.

“I don’t want him to go through all that I went. Because in professional sports most people don’t see what is inside. They only see a picture and videotapes which are like 40 minutes. They will see my walkout and my fight. but they don’t see 25 years of work I went through or how many surgeries I had on my knee, back, and ribs. How 1.5-2 years ago nearly died while weight cut. people don’t see it all.”

In the videos which have surfaced on the internet, Khabib Nurmagomedov looks effortlessly comfortable with kids as we get to see a more jovial side of the most dominant fighter in the history of UFC.

Khabib Nurmagomedov and his relationship with his mother

Khabib Nurmagomedov has always stated that he is closer to his mother than his father. Despite the very close relationship that Khabib had with his father Abdulmanap Nurmagomedov, Khabib has often stated in media interviews that he is a mother’s child.

Khabib dedicated his hard-fought victory over Gleison Tibau to his mother in the post-fight interview and was recently quoted saying that he likes his mom more than his dad.

“We are constantly talking about father, father, coach, father, coach. Of course, the father is the person I followed all my way. He was constantly near and helped with everything. But I am talking in Russian and I think I need to tell Mom. I’ll tell my Mom, I love my Mom more than my Dad.” Khabib said.

After his spectacular win over Justin Gaethje at UFC 254, Nurmagomedov decided to rest his gloves. Nurmagoemedov stated that he is honoring his words to his mother, who did not want his son to step inside the Octagon without his father on his side.

“I talk with my mother for three days, she doesn’t want that I go fight without my father. I promised her, it’s going to be my last fight, and if I give my word, I have to follow this. It was my last fight here.” Khabib said in the post-fight interview.

Nurmagomedov is the middle kid, and along with an elder brother Magomed Nurmagomedov, has a younger sister Amina Nurmagomedov. While Khabib has mentioned his brother in the past, owing to his background in MMA, he has never spoken about his sister.

Khabib Nurmagomedov shared a close relationship with his father Abdulmanap Nurmagomedov. Khabib’s father untimely death earlier this year due to a serious ailment which aggravated due to the coronavirus came in the wake of Khabib’s 29th pro-MMA fight against Justin Gaethje at UFC 254.

Abdulmanap was a senior coach for the combat sambo national team for the Republic of Dagestan, training multiple fighters in the capital of Dagestan, where Khabib Nurmagomedov would begin his MMA training.

Abdulamanap’s contribution to the sport of MMA will remain unparalleled and his greatest gift to the sport in the form of Khabib Nurmagomedov will be remembered for a lifetime. Khabib Nurmagomedov will be stepping in without his father at his side for the very first time when he takes on Justin Gaethje in a title unification bout for the UFC Lightweight Championship at UFC 254.

“Father, I will miss you. You were my father, friend, brother, and coach in one. You taught me practically everything I know. I hope you were pleased with me,” Khabib Nurmagomedov wrote.” Khabib had said in a post dedicated to his later father Abdulmanap Nurmagomedov.

Khabib and Abdulmanap’s relationship goes beyond a father and a son and scales the heights of the best student-coach relationship in the history of the sport. A judoka himself, Abdulmanap trained Khabib until his last breath and groomed the most accomplished and dominant fighter the history of sports will ever witness.

“Thank you for these guys, these guys with me, been with my father for more than 10 years. All my team, AKA with coach Javier, I love him so much, all my team. Today, I want to say, this was my last fight. No way am I going to come here without my father.” Khabib said.

Soon after his emphatic win over Justin Gaethje at UFC 254, Nurmagomedov announced his retirement from the sport. In an emotional retirement speech, Nurmagomedov credited his father for everything he has achieved inside the Octagon. He rested his gloves, vowing to never return again without his father on his side.