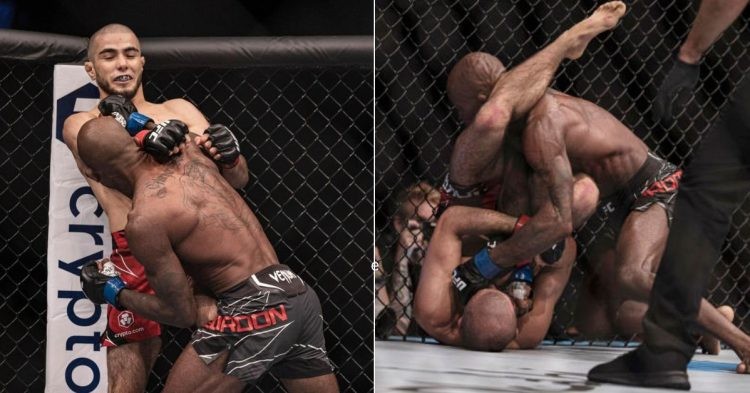 Muhammad Mokaev rose to the challenge as he submitted Malcolm Gordon in the third round at UFC 280 to pick up his third straight win inside the Octagon. Coming off a unanimous decision win over Charles Johnson, there were high expectations from the British prospect who has made a name for himself in the UFC’s flyweight division in such a short period of time.

🇬🇧 @MuhammadMokaev stays undefeated and snatches the arm as a souvenir! #UFC280 pic.twitter.com/2iqMRm2EwP

Partly because of his dominant grappling and his Dagestani background, Mokaev seemingly failed to impress fight fans despite the win at UFC 280. Mokaev struggled in his last fight to take down Charles Johnson, and once again found himself in a tough match-up against Gordon.

While Mokaev was able to take down Gordon on multiple occasions, the latter also showed some incredible work on the ground, catching Mokaev in a triangle in the second round. Gordon had Mokaev’s back and had the Dagestani fighter in a neck crank, if not for the bell.

Gordon had Mokaev on his back in the third round as well, and while he was not able to do anything of damage, he did scare Mokaev with submissions. The Canadian fighter also landed some takedowns of his own. Be that as it may, Mokaev was able to reverse the positions and eventually submit Malcolm Gordon with an arm bar to win the fight.

Be that as it may, despite the victory, fans were not impressed with Mokaev’s performance, who himself admitted after the fight that he seriously “underestimated” his opponent.

The way he fights, he’s gonna get submitted. Got saved by the bell in the 2nd round.

This kid is never going to be champion. Too focused on running his mouth, ground game not as great as we expected.

While some fans called Mokaev “overrated”, others were disappointed with his grappling skills. There were also a group of fans who criticized Mokaev for “running his mouth” more than fighting a disciplined fight. Needless to say, the fight will be a lesson for the British fighter who faced the toughest challenge of his mixed martial arts career in the form of Malcolm Gordon.

What did you make of Muhammad Mokaev’s performance at UFC 280? Do let us know in the comments section.