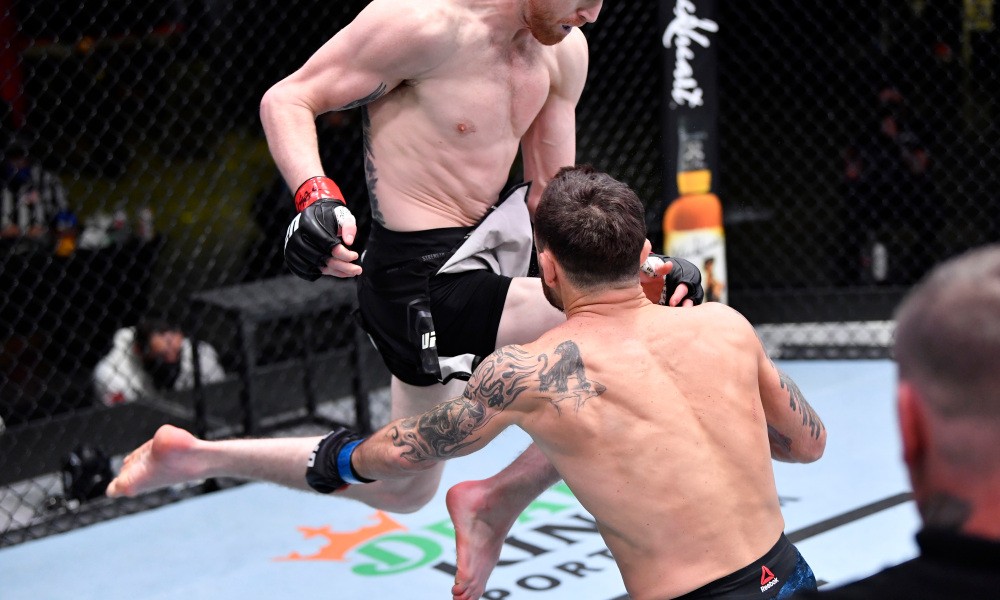 And the Flying Knee KO is back. In 2019, it was Jorge Masvidal who knocked out Ben Askren in a devastating fashion with a flying knee. And now it’s Cory Sandhagen who puts UFC veteran and former lightweight champion, Frankie Edgar to sleep with a stunning flying knee at UFC Vegas 18.

After an impressive knockout win over former no one title contender in the bantamweight division, Marlon Moraes, Cory Sandhagen took on Frankie Edgar. Edgar was coming off a win over Pedro Munhoz and looking to climb the ladder in the division to achieve the UFC gold once again in his illustrious career.

However, Cory Sandhagen shattered the dreams of Frankie Edgar by handing him a first-round knockout loss. And this loss does raise concern for the longevity of the UFC veteran, Frankie Edgar.

Going into the fight many fans favored Sandhagen to win the fight but very few would have expected this outcome. Sandhagen was never known for his insane power in the bantamweight division. However, with back-to-back knockout wins, he has put the bantamweight champion, Petr Yan, on notice.

Frankie Edgar’s speed, his boxing, and his ability to mix things up with his wrestling are the factors that have helped him throughout the years. The flying knee is always destructing against a wrestler but Edgar is one of the best when it comes to level change and mix his wrestling with his striking.

However, he was not even going for a takedown on this occasion. Sandhagen connected the flying knee while Edgar was looking to strike with him. And it did not take a follow-up punch to convince the referee to call off the fight.

What’s Next For Frankie Edgar?

Edgar has taken a ton of punishment throughout the years, especially in recent times.

He took brutal punishment in his fight against Max Holloway, and he was viciously KOed by The Korean Zombie. Though he was able to bag a win against Pedro Munhoz on his bantamweight debut it’s safe to say that he was gifted the decision win by the judges in that fight. And with another devastating loss, there should be serious concerns around Edgar’s UFC future.

However, there are some fights that will make sense for Edgar. The third bout between him and Jose Aldo makes sense considering both of them are coming off a loss against two of the top bantamweight fighters. Edgar might even fight TJ Dillashaw who is looking to make his UFC return soon. Though there are some fun fights to make for Frankie Edgar he is not going to rally multiple wins and win the bantamweight championship. Edgar

It’s hard to say that Edgar should retire since he can beat some of the top bantamweights in UFC. However, it’s safe to say the best days of Frankie Edgar is behind him.