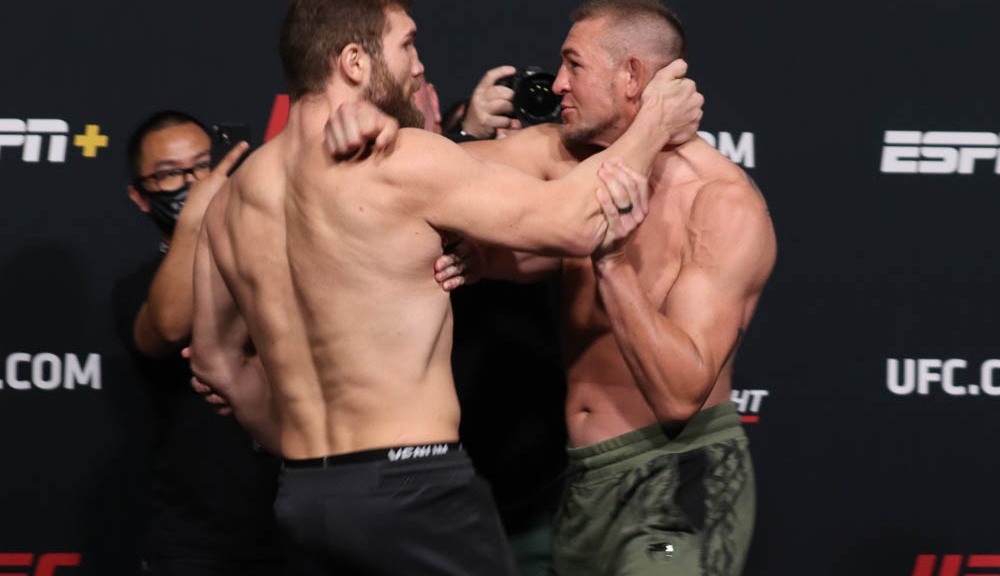 UFC Fight Night: Dominick Reyes vs Jiri Prochazka features a light heavyweight bout between Ion Cutelaba and Dustin Jacoby. Every time Ion Cutelaba gets into the octagon there is always some drama and that’s why Cutelaba is such an interesting fighter despite a 4-5 record in UFC.

However, this time Cutelaba might have crossed the line. Cutelaba got some criticism from the fans after he initiated a physical altercation with Jacoby during the weigh-in. Nevertheless, it’s a fight and the beef will be settled inside the octagon.

Ion Cutelaba is coming off two losses to Magomed Ankalaev in his last two fights. On the other hand, Dustin Jacoby is on an impressive four-fight winning streak.

This fight is a tricky one to predict. However, one thing that can be guaranteed is this fight is not going to last for three rounds. The outcome of this fight will also depend on which version of Cutelaba shows up on fight night.

His last loss against Magomed Ankalaev is a perfect example of that. However, to be fair, Ankalaev has the skillsets to beat some of the top light heavyweights in UFC.

In this fight against Dustin Jacoby, Cutelaba will have a huge grappling advantage. He will also be the more aggressive fighter among the two on the fight night. It’s hard to match the intensity Cutelaba brings into the octagon.

On the other hand, Dustin Jacoby has the momentum in his side with 4 consecutive wins. He is predominantly a striker and his ground game has not been put to test yet in UFC. And if Cutelaba can take Jacoby down then we might see some vicious ground and pound from Cutelaba.

However, a lot will depend on how the early minutes of the fight plays out. Cutelaba is an exciting talent inside the octagon and he will be going for a finish in the first round. This will allow Jacoby some room to land his shots and do some damage early in the fight.

This fight has the potential to turn into a barn burner. But, Cutelaba should get the job done against Dustin Jacoby at UFC Vegas 25. Ion Cutelaba is the better grappler and has the knock-out power to finish the fight at any time.