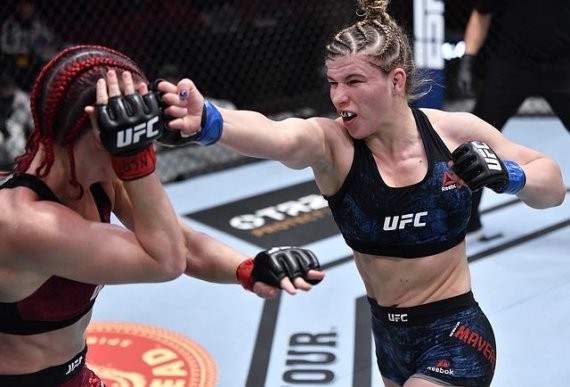 Miranda Maverick is a talented and skilled fighter. She is a quick striker with solid volume. Her hands are often thrown in combination while moving forward, this also helps set up her takedowns. She also has a high-level wrestling with the ability to finish her opponents.

At range, though, Maverick can throw undisciplined kicks that leave her open to be taken down. Even then, she is the betting favorite (-315).

Sabina Mazo has a reputation of being a tactical and technical striker who uses her length well to keep the fight at her range. Though she is a slight underdog in this bout (+255).

Mazo is a technical striker with a solid jab; however, she doesn’t have much stopping power. Also her footwork is slow. Because of these reasons, her opponents have been able to crash distance and force her to uncomfortably and unsuccessfully fight in the pocket.

Mazo prefers to keep the fight on foot but once taken down, she struggles to defend herself or get up. At range, in a striking match, Mazo can use her volume and cardio to point-fight her way to wins. But, until she improves her footwork and takedown defense, she’ll continue to struggle against pocket strikers and wrestlers.

Judging by their past fights, it is clear that there is a significant skill gap.

Maverick is a stylistic nightmare for Mazo. Maverick will crash distance, land the heavier shots, and has the wrestling to get the fight down quickly.

Mazo will have a significant height and reach advantage. And she will be eager to use that advantage to close the distance. But in Sabina’s fight with Davis, Mazo showed that her takedown defense is very poor. Maverick with her superior ground skill will surely exploit that.