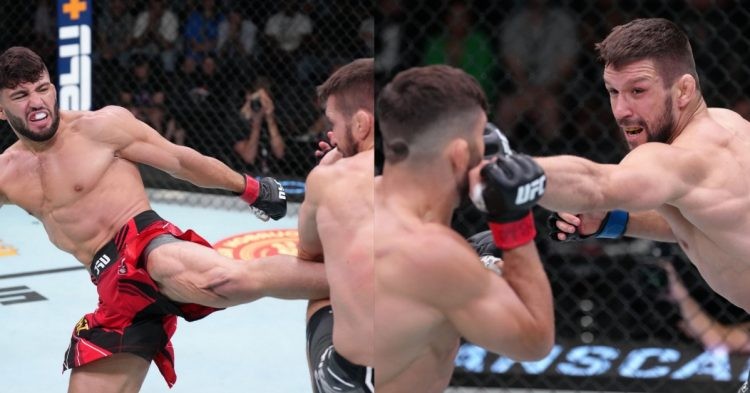 Was Arman Tsarukyan robbed at UFC Vegas 57? (Images via Twitter)

2022 has produced a ton of potential ‘Fight of the Year’ contenders so far. UFC Vegas 57’s main event will be another addition to that list as Arman Tsarukyan and Mate Gamrot put on an instant classic. With two amazing grapplers going at it for 5 rounds, fans expected a good clash. But nobody would have hoped for the back and forth scrap that they got to witness.

After 25 minutes of an elite level of grappling and entertaining striking, Mateusz Gamrot got a unanimous decision victory over Arman Tsarukyan. The Armenian-Russian fighter seemed extremely disappointed to not get the judges’ nod as Gamrot was elated with joy. Speaking to UFC hall of famer Michael Bisping, Arman expressed his disappointment as he said,

With the loss, Tsarukyan will most probably take a demotion in the ranking. He occupied the no. 11 spot in the lightweight ranking and he will most likely find himself a few ranks below on Tuesday when the updated list comes out. Arman has aspirations of being the champion. Hence, the loss is a big blow for his immediate future.

However, there seems to be a dispute online regarding the decision. A lot of arguments have been made in favour of the 25-year-old. So the question arises, was Mateusz Gamort the rightful winner against Arman Tsarukyan at UFC Vegas 57? Let’s find out.

Was Arman Tsarukyan robbed against Mateusz Gamrot at UFC Vegas 57?

The statement, ‘It was a hard fight to judge’, has never seemed truer. Nobody in the Mixed Martain Arts (MMA) community envied the jobs of the judges on the night. Whenever two elite grapplers are involved in a close fight, scoring becomes extremely difficult. More often than not, the outcome of the bout depends on who ends up being the better striker.

On the feet, there can be no argument against Arman Tsarukyan being the better striker. He landed a total of 110 strikes as opposed to Gamrot’s 108. But it was Arman’s activity on the feet that gives him the edge. He attempted a total of 264 strikes, whereas Gamrot had a much lower output with only 166 attempted strikes.

Turn your sound on for this kick 🔊

Among their collective strikes, Tsarukyan landed 95 significant strikes and Mateusz managed to land 81 strikes. Arman was better about mixing up his strikes as well. 45% of his strikes were to the head and 41% were directed to Gamrot’s body. But the Polish fighter was headhunting in the bout. He directed 83% of his strikes to Arman’s head.

In terms of damage, Tsarukyan was the fighter to score the only knockdown of the contest a spinning back fist in the 3rd round dropped Gamort. His kicks to the body also brought out visible groans from Gamrot. In the final round, a leg kick also made Mateusz lose his balance as he fell to the mat. But Arman was never able to build up the momentum to take advantage of his superior striking skills.

This didn’t result in a takedown for Gamrot 🤯 #UFCVegas57 pic.twitter.com/htLSpY4qSI

That is where the fight went out of Tsarukyan’s hand. Whenever he landed something big, Mateusz was quick to tangle him up in a takedown attempt. In total, Gamrot attempted 21 takedowns and managed to secure 6 of them, while Tsarukyan secured only 1 of 8.

The 31-year-old fighter had a total of 4 minutes and 58 seconds of control time in total throughout the fight. But Arman also managed to have 1 minute and 39 seconds of ground control in the contest. The judges must have been swayed by the grappling superiority of Mateusz.

But Gamrot never really had Tsarukyan in a spot where he had to shoot for a takedown out of desperation. On the other hand, Gamrot was looking for takedowns repeatedly after getting lit up by Arman on the feet. Hence, Tsarukyan has all the right to be disappointed to not get the judges’ nod.

He pushed the pace, hurt Gamrot a number of times on the feet and never really allowed the Polish fighter to put him in a difficult position on the ground. But there was no decisive action from Arman either, where he was on the verge of getting a finish. He seemed to be lacking 5-round cardio at the end as well.

As result, the outcome can be considered unfortunate, but it can not be labelled as robbery by any means.