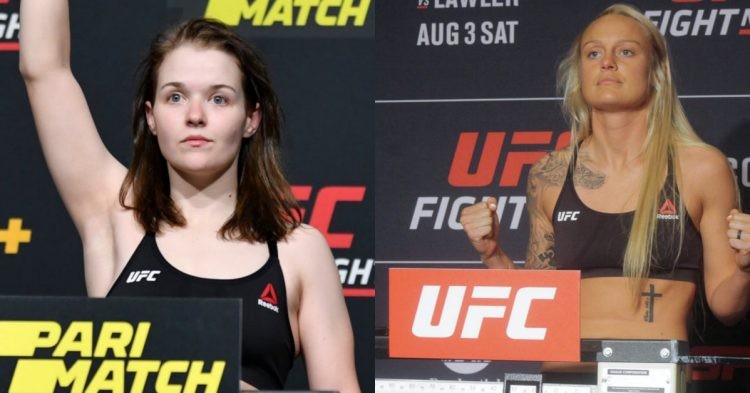 Cory McKenna vs Miranda Granger is set to go down at UFC Vegas 59. The strawweight fight is scheduled for the preliminary card of the event this weekend. Both fighters are coming off losses as Cory lost to Elise Reed, and Granger was defeated by Ashley Yoder.

Nicknamed Poppins, Cory McKenna defeated Vanessa Demopoulos in Dana White’s Contender Series in 2020. She beat Kay Hansen on her main roster debut in the same year. But she took almost 2 years off ahead of her last bout against Elise Reed in March of this year.

Miranda Granger was undefeated prior to joining the UFC. She had a record of 6-0 before her UFC debut. She is the former Fury FC Strawweight Champion and the DFC Strawweight Champion. Hence, it was natural to have a high expectation for her to do well in the UFC. Although she beat Hannah Goldy on her UFC debut, she lost to Amanda Lemos and Ashley Yoder in her next 2 fights.

Although Miranda Granger had a bad start to her career, she has a significant pedigree behind her. She possesses 1 knockout along with 5 submissions. Nicknamed Danger, Miranda lands 2.91 strikes per minute while absorbing 2.64. Although her striking has been decent so far, she has not been able to implement her ground game at all.

Cory McKenna has had a much better run in the UFC in comparison to Granger. Although she lost her last fight, it was a split decision loss. Although Reed outlanded her, Cory landed 3 takedowns in the contest. In general, the Welsh fighter lands 3.64 strikes per minute. She also averages 1.33 takedowns per fight.

Hence, she will be the slight favourite to win the fight. However, she has a huge reach disadvantage, one of the biggest in recent memory. But that is understandable because of the height disadvantage between the two. But, Granger is on the worst run of form in her career so far. Hence, McKenna will be the mental edge over Miranda.

Miranda is much older than Cory. Will the old guard be able to hold her place against the young contender? Although all the signs point toward a Cory McKenna victory, anything is possible in a sport which is as unpredictable as MMA.