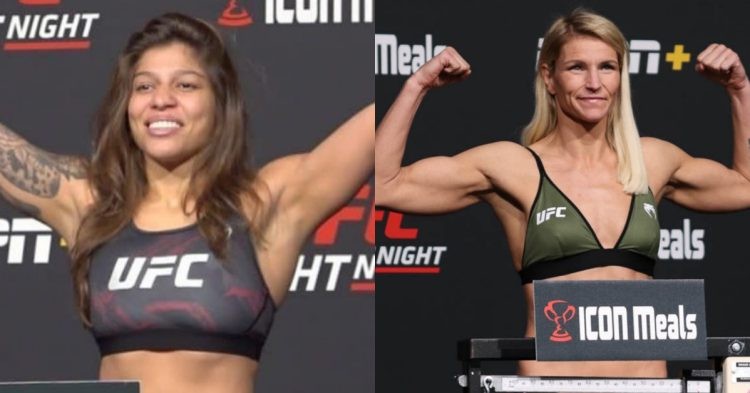 Stephanie Egger is back after her fresh win over Jessica-Rose Clark in February. She will be fighting Mayra Bueno Silva in the very first fight of UFC Vegas 59. The bout is scheduled for 3 rounds in the women’s bantamweight division. Bueno Silva is also coming off a win over Wu Yanan in April.

Fighting out of St Gallen, Switzerland, Stephanie Egger is on a two-fight win streak. The first win was against Shanna Young where she won via TKO. But in her last fight, she dismantled Jessica in a brutal armbar finish. She will be looking to keep the momentum going this Saturday.

Mayra Bueno Silva had a decent start to her UFC career. She came into the promotion after beating Mayana Souza at Dana White‘s Contender Series in 2018. She then went on to beat Gillian Robertson on her main roster debut. Mayra currently holds a record of 3-2-1 in the company.

If we look at the career stats of Mayra Bueno Silva, she holds 5 submissions, 1 knockout and 2 unanimous decision wins. 3 of the submissions have already come under the UFC umbrella. However, she does not initiate any takedowns. Instead, Silva wants to trade on the feet and wait for her opponents to initiate the takedowns.

Bueno Silva lands at a rate of 4.25 strikes per minute while absorbing 4.98 strikes. Despite that, she is yet to be knocked out in her career. That record is most likely to remain intact against Stephanie Egger who is more comfortable grappling instead of striking.

Egger lands only 1.69 strikes per minute and absorbs the same number of strikes too. But she lands 2.87 takedowns per fight and attempts 0.6 submissions. In comparison, Mayra attempts 1.3 submissions per fight. So the fans are in for a real treat on Saturday.

Although Silva will definitely be the more aggressive fighter, Egger will be the favourite to win. Stephanie will have a significant reach advantage and she is more defensively sound than Silva. On top of that, The Swiss fighter is much stronger which will help her in controlling the grappling exchanges. So Egger will be the smart pick for this weekend.