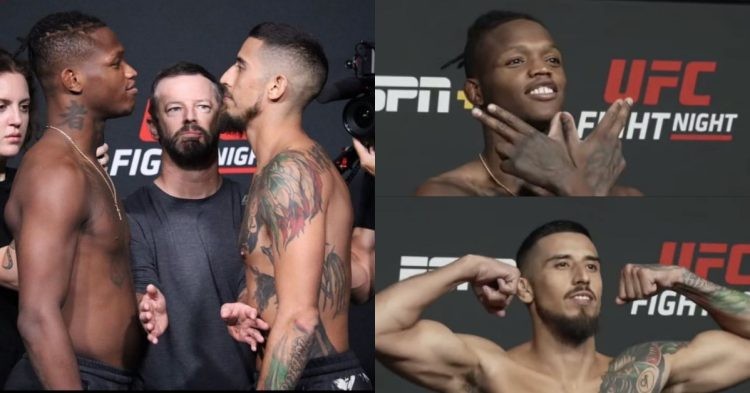 Terrance McKinney will return to the Octagon this Saturday. In the prelims of the upcoming UFC Vegas 59, he will take on Erick Gonzalez. The bout will go down in the lightweight division and it promises to be a spectacular back-and-forth brawl. Both fighters are coming off a loss in their respective last fights.

Nicknamed ‘T. Wrecks,’ Terrance McKinney is perhaps the most exciting young striker in the UFC lightweight division. From the very first second, McKinney put his opponents on the back foot. He has crisp striking with an insane volume. In his last fight, he almost finished Drew Dober before Dober had a resurgence and came back to win the fight.

Erick Gonzalez made his UFC debut against Jim Miller in his last fight. He ended up losing the bout in the second round via knockout. Although his debut did not go the way he wanted it to go, Gonzalez still landed a few decent strikes in the fight. Prior to that, he was on a two-fight win streak. He had beaten Samuel Alvarez and Oziel Rodriguez via unanimous decision and knockout respectively.

Terrance McKinney tried out his hand in the Dana White‘s Contender Series in 2019. However, Sean Woodson beat him via a spectacular flying knee knockout. But McKinney did not give up and beat Dedrek Sanders, Toninho Gavinho and Michael Irizarry Ortiz back-to-back to find himself on the main roster of the UFC. He knocked out Matt Frevola in just 7 seconds on his UFC debut.

He then followed it up with another first-round finish of Fares Ziam. The 27-year-old lands 4.11 strikes per minute while absorbing only 1.77 strikes. It goes to show that Terrance has tightened up his defence much more than before. He also averages 4.84 takedowns per fight. It proves that he is not just a one-dimensional fighter.

Erick Gonzalez, on the other hand, is primarily a striker. He holds 8 knockouts and 1 submission win under his belt. Fighting out of Los Angeles, California the 30-year-old will try to earn his very first UFC win this Saturday. Although Terrance has a 100% finishing rate, he has cardio issues due to his heavy output.

If Gonzalez can survive the initial burst, then there is a chance of him taking advantage of a much more deflated Terrance McKinney. However, T-Wrecks will be the favourite to win this weekend.