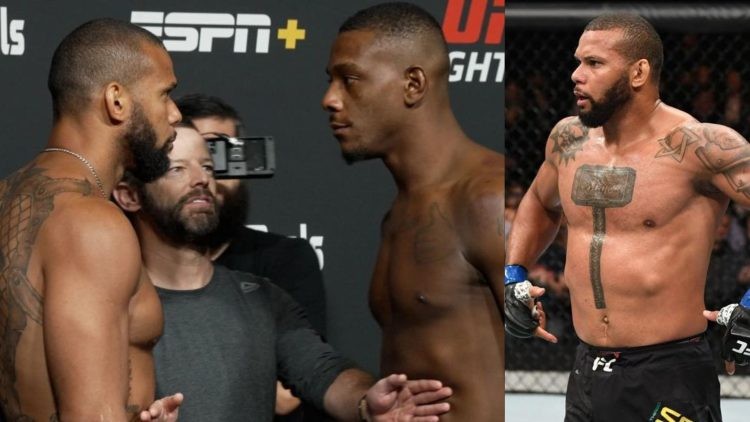 UFC Vegas 59 features a light heavyweight bout between Thiago Santos vs Jamahal Hill. It’s an exciting fight between a UFC veteran and a rising star in the division.

On paper, Jamahal Hill looks like a strong favorite to win this fight. The 31 year old has won 3 out of his last 4 fights by KO and TKO. On the other hand, Thiago Santos has won only one fight in his last 5 fights. But finishing Santos is not going to be an easy task for Hill. If the fight goes to the later rounds, can Hill keep up the volume and pressure to win the fight on scorecard?

Many fans consider Jamahal Hill as a knockout artist in the light heavyweight division. He has scary power in his hands and his recent knockout wins over Johnny Walker and Jimmy Crute are certainly impressive.

However, Thiago Santos has not been finished by KO in his career since he moved up to lightweight. Glover Teixeira did hurt him but he had to go for submissions to secure a win. Santos has a solid chin and he can go five rounds very comfortably.

But, the biggest concern with Santos is going to be his willingness to throw caution in the wind and go for the kill. Before Thiago Santos fought the former light heavyweight champion, Jon Jones he was known for his aggressive fighting style and knockout power.

Santos is also a black belt in brazilian jiu jitsu with some nasty ground and pound. But, the fight against Jones completely changed Santos.

Thiago Santos has lost 3 fights after losing to Jon Jones

Santos suffered multipel leg injuries in the Jon Jones fight. Even though some fans believe Santos won the fight the judges scored the fight in favor of Jon Jones.

Following the fight, Santos took a long layoff and he was never the same fight when he made his octagon return. Since then he has lost to top light heavyweights such as Magomed Ankalaev, Glover Teixeira, and Aleksander Rakic.

So it’s very likely that the fans will see Jamahal Hill secure a victory over Thiago Santos. And, it’s going to be a TKO win for Hill. Hill’s movement and precision will be too much for Santos, who is not in his prime anymore.