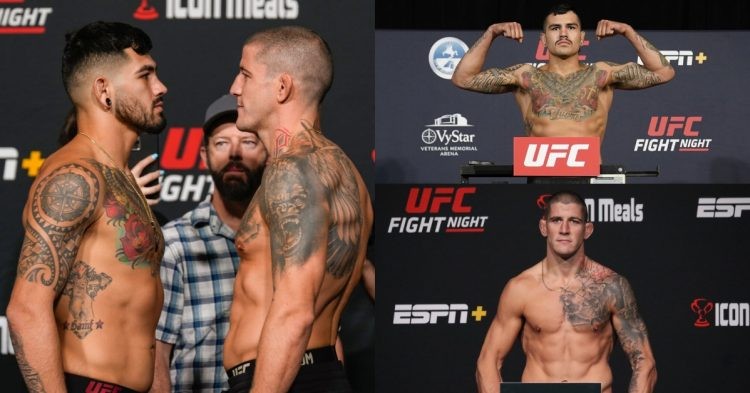 UFC Vegas 60: Sandhagen vs Song is all set to go down this weekend on September 17th at the UFC Apex in Las Vegas. Middleweight contender Anthony Hernandez will kick off the show as he goes against Marc Andre Barriault in a three-round bout scheduled on the main card.

Both Anthony Hernandez and Andre Barriault picked up impressive wins in their last fights and hence it would be interesting to see who carries on the winning momentum and gets his hands raised by the referee. Hernandez put on a one sided display as he dominated Josh Fremd on the ground and won the fight via unanimous decision.

After an up-and-down start in the Octagon, Anthony Hernandez (@Ilovebamf) has a chance to put together a 3-fight winning streak this weekend at #UFCVegas60.

Meanwhile, Marc bounced back from his knockout loss as he submitted John Wright in the first round of his last fight. As we move ahead, let’s compare the stats of the two middleweight that will collide against each other at UFC Fight Night: Sandhagen vs Song.

After a sloppy start to his UFC career with only one win in his first four fights, Anthony Hernandez is on track with two back-to-back wins to his name. In order to get one step closer to the top 15 rankings of the division, Hernandez will need to make a statement and extend his winning streak to three at UFC Vegas 60.

On the other hand, his opponent Marc Andre Barriault barely managed to retain his spot in the UFC after failing to win a single fight in his first four matchups. Powerbar has showed part good potential in the past but his inconsistent performances have hurt his growth in the 185-pound division.

Speaking about this matchup, fight fans can expect a close battle that could go either way as they are evenly matched up. If this turns out to be a striking battle then we can expect, Barriault to come out all guns blazing and attack aggressively.

Comparing the two middleweights, Hernandez is a type of striker with great accuracy and jiu-jitsu skills. One can expect him to attempt takedowns if the going gets tough on the standup. Both the fighters have good takedown defense and the matchup will most likely end up in a striking war.

Unless Marc Andre Barriault looks for the knockout it would be very difficult to get a win just with the help of his striking output as Hernandez has much better cardio and durability.