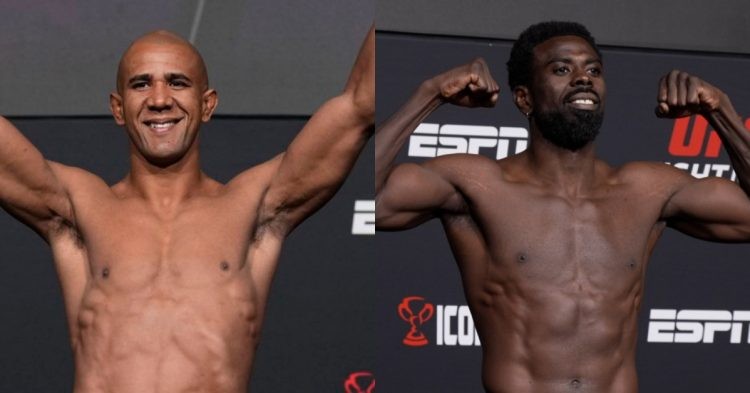 Chidi Njokuani is set for a big step up as he takes on Gregory Rodrigues in the co-main event of UFC Vegas 60. Njokuani is currently on a 2 fight win streak after getting into the company on the back of a win at Dana White‘s Contender Series. On the other hand, Gregory Rodrigues beat Julian Marquez in June of this year.

Rodrigues started his MMA career in 2014. Before making his way to the UFC, Gregory managed to beat Brandon Hester in 2019 for the SMASH GLOBAL middleweight title. He then went on to beat Josh Fremd for the LFA middleweight belt in May of 2021. So Gregory definitely has had a good career prior to the UFC.

Nicknamed ‘Bang Bang,’ Chidi Njokuani is a veteran of the sport. Although he is just 33 years old, Njokuani made his pro debut in 2007. He has fought for a lot of promotions before the UFC, including Bellator. Much like his opponent this Saturday, Chidi also came into the company via DWCS. Since then, he has beaten Marc-André Barriault and Duško Todorović in his two main roster fights.

Both Chidi Njokuani and Gregory Rodrigues have fought Duško Todorović during their run in the UFC. While Rodriguez beat Dusko via unanimous decision, Njokuani knocked him out. Although styles make fights, the result gives the fans an idea of who may possess more power. While Chidi has 14 knockouts and 1 submission, Gregory has 4 submissions and 6 knockouts.

Grappling is the biggest aspect of an MMA fight and judging by the numbers, it looks like Gregory has the better skills on the ground. The 30-year-old is yet to be submitted in his career while Njokuani has 3 submission losses. So the bout becomes a very intriguing one. While there are question marks about both of their chins, grappling may just be the difference.

Nicknamed Robocop, Rodrigues has an average of 2.40 takedowns per fight and Chidi has a takedown defence of 76%. So Njokuani will need to keep the fight on his feet to have any chance of winning. Otherwise, Gregory will shoot for a takedown and pretty much handle the 33-year-old on the mat. Hence the smart money will be on Gregory Rodrigues to beat Chidi Njokuani this weekend.