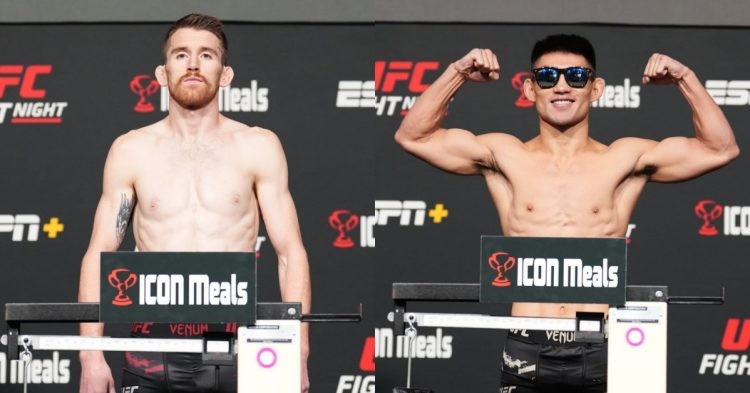 After a few blockbuster shows on the road, UFC returns to base for this weekend’s event. This particular fight night will put the focus on the bantamweight division, which has been on fire lately. Cory Sandhagen will be fighting Song Yadong in the main event of UFC Vegas 60 this Saturday.

Cory Sandhagen was on track to become the champion of the division. But he has suffered a few setbacks in the last 2 years. Before his fight against Aljamain Sterling, Cory was unbeaten in the UFC. However, in his last 5 fights, he has lost 3. But, he has still retained a relatively high ranking (4th) in the division.

Song Yadong is currently ranked 10th in the division. Although he is just 24 years old, Song has already had 10 fights in the promotion with 8 wins, 1 draw and 1 loss. So he certainly has a spectacular record in the company. He is presently on a 3 fight win streak. In his last fight, Yadong retired Marlon Moraes with a brutal knockout.

UFC has been trying to push its content in China for a long time now. They already had a champion from the region in Zhang Weili. Song Yadong has the potential to be the next UFC champ from China. Song is a ferocious puncher with a great chin. He also has decent grappling to support his striking.

On average, Song lands 4.92 strikes per minute with an accuracy of 42%. Although he absorbs 3.78 strikes at the same time, he more than makes up for it with his powerful strikes. He has not been outstruck by his opponents in his last 5 fights. So it gives an idea of how busy Song is inside the Octagon.

On the other hand, Cory lands 6.42 strikes per minute, which is much higher than Yadong. But his punches do not have the same effect as his opponent’s this Saturday. However, he does have a better ground game than the Chinese fighter. Sandhagen has a takedown average of 0.71 per fight while Yadong has an average of 0.45.

Cory will have a big height and reach advantage. The fans have seen the 30-year-old land some brutal kicks which knocked out Frankie Edgar. So it is more than likely that Cory will try to land one of those kicks. He will also bring in the threat of a takedown as he holds the better grappling stats between the two.

But, one thing that fans will have to keep in mind is that both of his last opponents, Petr Yan and TJ Dillashaw, were much shorter than him. But both found a ton of success as Sandhagen had difficulties reading the angle of their punches. Can Song replicate that? It remains to be seen.

But, Cory Sandhagen will be the smart pick for this weekend. He has fought at the highest level for much longer than Song Yadong. Although it will surprise none if Song walks away with a win, Sandhagen is the clear favourite this Saturday.