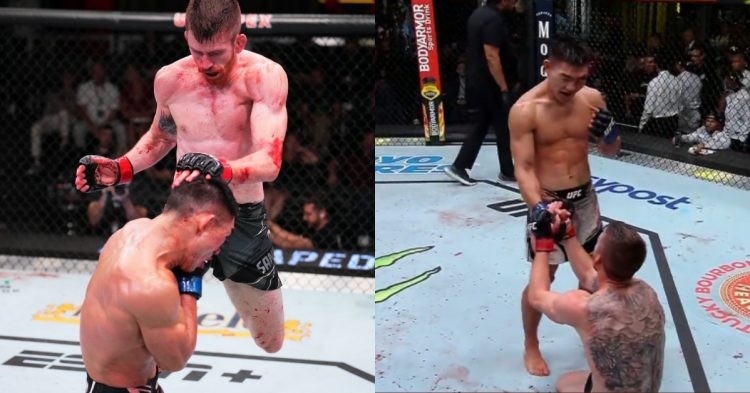 UFC Vegas 60 saw two exciting bantamweight fighters going at it in the main event. 4th ranked fighter in the 135lbs division, Cory Sandhagen fought a bright and young fighter, Song Yadong, who was ranked 10th at the time.

Cory Sandhagen is one of the best prospects in the UFC right now. Although he had a great start with 5 successive wins inside the Octagon, Cory was coming off two close losses against TJ Dillashaw and Petr Yan. Hence, he needed to win the fight desperately in order to be considered an elite fighter.

The men around who this fight card was built! 🙌@CorySandhagen vs @SongYaDongMMA take center stage NOW.

His opponent was a 24-year-old Chinese fighter who was coming off 3 successive wins. At such a young age, Song has built up a great resume. He defeated the likes of Marlon Vera and Marlon Moraes. So Yadong was no joke and the 30-year-old needed to be on his A-game to get his hand raised. So how did it go? Let’s find out.

Cory Sandhagen did not want to trade against a powerful striker like Song Yadong. Hence, he level-changed quite early and attempted a takedown. However, Yadong’s defence was on point and he followed up with some impressive strikes. Ironically, once the fight hit the ground, it was Song who ended up on top.

However, the round was not all defence from Cory as he also landed a few great strikes to the body. They ended round 1 by trading some big shots. However, neither seemed to do much damage to the other. There was a change in approach to Cory’s game at the start of round 2 as he attempted to land more kicks. But Song seemed to get a sense of Sandhagen’s timing.

Yadong also landed a big hook which wobbled Cory for a second. But The Sandman did not let the Chinese fighter take advantage of that as he landed a flash takedown. Cory also landed some killer elbows during the course of the round and one of those opened up a big cut just above Song’s left eye. It seemed to impact his movement as Yadong’s vision was severely comprised by the blood flow.

At the end of round 2, it did look like Cory was in an advantageous position. But it made Yadong fight in a much more aggressive manner. He tried to blitz forward and land some big punches on Sandhagen. However, he could not seem to break through Cory’s defence. Although Cory himself was not landing much, he was doing just enough to make Song more and more desperate.

To the main event rounds we go! 🍿 #UFCVegas60 pic.twitter.com/TH7MBufgjM

Song was trying his best to corner his opponent in order to land a string of punches, but Sandhagen’s movement kept him at bay. Cory ended round 3 with one of his trademark huge knees. Ahead of the start of the 4th round, the doctor had a close look at the cut and looked like he was ready to call the fight if the wound opened up any further.

It provided Yadong with some extra motivation to do some damage to Cory. With 3:30 minutes left on the clock, Song took down Cory by sweeping his leg. But Cory was once again masterful on the mat and got back up pretty much immediately. Not only did he get up, but Sandhagen also followed it up with a takedown of his own. The ground and pound seemed to worsen the cut.

Back in the win column 💪

The fight was ultimately stopped by Herb Dean after the culmination of the 4th round after the doctor said that he was not liking how much damage Song was taking. With the win, Cory Sandhagen breaks his 2-fight losing streak and gets his UFC career back on track.

After the stoppage, Song Yadong did not protest much. He walked over to Cory to congratulate him on the win and stated, “I can’t see at all.”

It was a heartbreaking way to lose a fight which was very close until the stoppage. However, Song is just 24 and he will use it as a learning curve to improve his game and come back stronger.