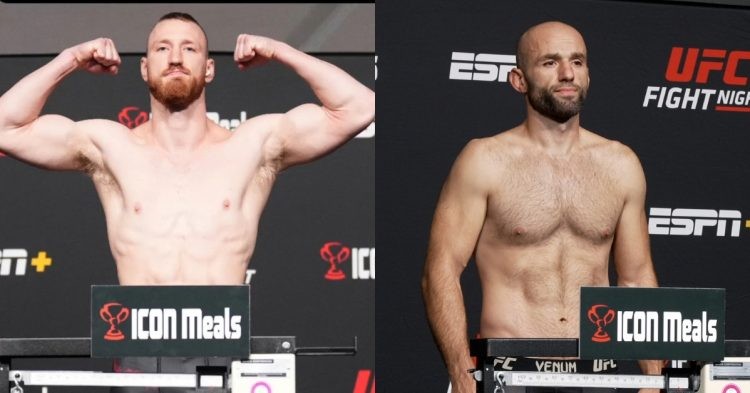 UFC Vegas 60: Sandhagen vs Song will begin with its proceedings this weekend on September 17th at the UFC Apex in Las Vegas. This event features several mouthwatering matchups that will keep the viewers on the edge of their seats throughout the evening.

Subsequently, one of the fights that have the potential to raise the roof is the middleweight matchup between Joe Pyfer and Alen Amedovski. All eyes would be on Joe Pyfer who makes his UFC debut after earning a contract with a knockout win over Ozzy Diaz at DWCS back in July this year.

Meanwhile, Alen Amedovski is in a dire situation as he will be looking to get his first win in the UFC after getting outclassed by all three of his opponents. As we move ahead let’s compare the stats of the two middleweights that will clash inside the UFC octagon this weekend.

Joe Pyfer is one of the most highly touted middleweight prospects in the UFC and as said earlier it would be fascinating to see how he performs in his debut against Alen Amedovski at UFC Vegas 60. Pyfer has shown that he has tremendous one-punch knockout power and his six knockout wins are a testament to his terrific striking.

Going into this fight, not only is Bodybagz better than Amedovski in striking but he is a smart grappler as well. Joe Pyfer has the ability to find the correct moments to land a takedown and inflict a lot of ground and pound damage to his opponents.

Looking at Alen Amedovski’s struggle against fighters with good grappling skills, one can expect Pyfer to rely on takedowns if things don’t go according to his plans for the standup. It is needless to this is a bad matchup for Amedovski and it would be extremely tough for him to win this fight.

So the only way he can get a result is by going for the knockout from the get-go. Because Bodybagz has a better striking technique and submission skills and is more dangerous in both departments. In the end, one can expect Joe Pyfer to finish the fight and get his hands raised by the referee at UFC Vegas 60.