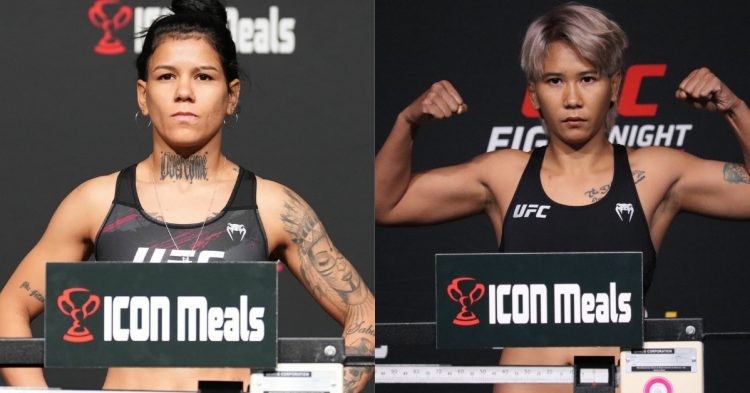 UFC Vegas 60: Sandhagen vs Song is all set to take place on September 17th at the UFC Apex in Las Vegas. This event features an exciting three-round women’s strawweight bout between Denise Gomes and Loma Lookboonmee that is scheduled in the prelims.

Denise Gomes who is making her UFC debut will be looking to make a good impression as she is pitted against an experienced strawweight contender Loma Lookboonmee. Taking a look at their last fights, Loma put on a lacklustre performance and suffered a unanimous decision loss to Loppy Goodinez in her last fight.

Meanwhile, Gomes performed exceptionally to outstrike Ravanne Miranda throughout the three rounds to pick up a decision win in her last fight which was at the DWCS. With that being said, it would be interesting to see how Denise performs under the bright lights in her UFC debut.

Denise Gomes has shown glimpses of her potential in her DWCS win over Ravanna Miranda. However, stepping in to fight an experienced contender like Loma Lookboonmee on two weeks notice without a proper training camp is a big disadvantage.

Both the strawweights like to stand and strike and we can expect a striking battle that could go to the distance. Although Loma Lookboonmee is a better striker with good striking accuracy and output than her opponent Denise.

Despite having an edge in height and reach, it would be difficult for the 22-year-old debutant to out-strike Loma throughout the three rounds. Besides, Gomes’ takedown defense has not been tested and Loma Lookboonmee would try to control the fight on the ground if she is unable to assert her dominance in the striking matchup.

Hence one can expect an entertaining fight between two good strawweight fighters. But in the end, the likelihood of Loma winning the fight is higher as he has more tools than her opponent Denise Gomes.