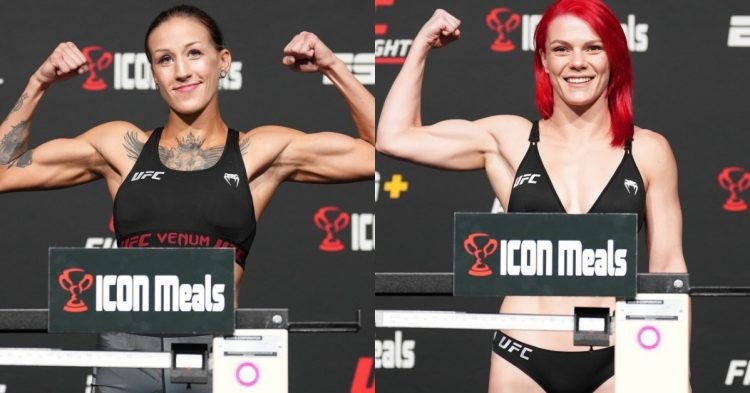 UFC Vegas 60: Sandhagen vs Song features several mouth-watering bouts that will keep the viewers hooked throughout the evening. Apart from the big names that feature on the main card, Gillian Robertson will be back in action as she squares off against Mariya Agapova in a three-round women’s flyweight bout scheduled in the prelims of the event.

Leading into this fight, both Mariya Agapova and Gillian Robertson are on the back of tough losses. Mariya Agapova was dominated by Maryna Moroz on the ground and was submitted in the second round in her last bout.

Meanwhile, JJ Aldrich outclassed Gillian Roberton throughout the three rounds to hand her a unanimous decision loss in their fight back in March. As we move ahead, let’s compare the stats of the two flyweights that will collide inside the octagon.

Mariya Agapova has had a mixed bag of results since earning the UFC contract after a win in the DWCS in 2019. However, Marita needs to rack up a good streak of wins if she wants to rise in the flyweight division and contend for the title in the future.

Going into this fight, Agapova has a five inch reach advantage over her opponent Gillian Robertson which will prove helpful in a striking battle. However, we can expect Robertson to not engage in a stand up fight and as she would be at a major disadvantage.

The key to victory for Gillian Robertson would be to go for the takedowns and dominate the fight on the ground as her opponent Mariya Agapova is poor at defending takedowns. Hence one can expect Gillian Robertson to get past her sluggish form and get her hands raised at UFC Vegas 60.