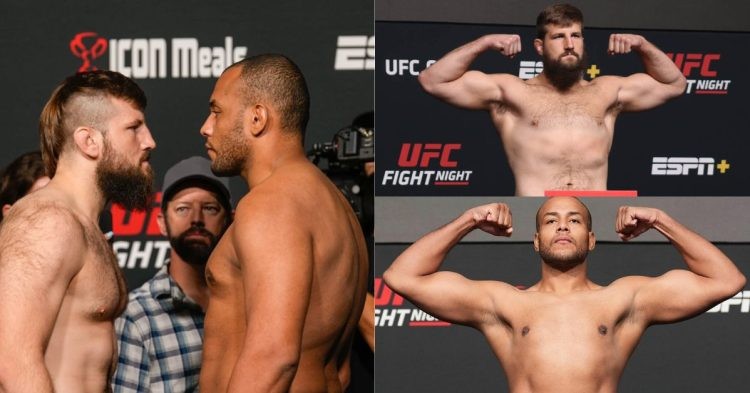 UFC Fight Night: Sandhagen vs Song will begin with its proceedings this weekend on September 17th at the UFC Apex in Las Vegas. This event features a mouthwatering heavyweight battle between Tanner Boser and Rodrigo Nascimento that is scheduled to take place on the main card.

Both Tanner Boser and Rodrigo Nascimento will step inside the octagon after a lengthy one-year layoff. The Bulldozer overcame his two-fight losing skid in his last bout as he dominated Ovince Saint Preux and knocked him out in the second round of the fight.

Meanwhile, Rodrigo Nascimento obliterated Alan Baudot in his last matchup and earned a performance bonus for his stunning knockout win. Going into this fight, both the fighters will be high on confidence and it is needless to say that this is a crucial matchup as a win would help either fighter get into the top 15 rankings of the heavyweight division.

As we move ahead, let’s compare the stats of the two heavyweights that will square off against each other at UFC Fight Night: Sandhagen vs Song

Tanner Boser was touted as one of the most dangerous heavyweights before making his debut in the UFC. However, he has not been able to deliver performances as per expectations and on some occasions, he has found himself on the wrong end of the judges’ decisions.

As mentioned earlier, Boser snapped his two-fight-losing skid as he finished Ovince Saint Preux in his last bout. It is needless to say that he would try his best to not leave the decision to the judges as he fell short in a razor close battle with Ilir Latifi and Andrei Arlovski.

However, Rodrigo Nascimento has a significant physical edge in terms of reach and weight and it could end up being the deciding factor in this matchup. Because Nascimento has an advantage of 32 pounds and this means that Boser cannot rush in wildly and exchange big shots or go for the takedowns.

If we compare the styles of the two fighters, Rodrigo Nascimento is more well-rounded with a greater threat in the standup as well as submissions. Meanwhile, Tanner Boser is a better grappler and is quicker than Ze Colmeia. The key to victory for Tanner Boser would be to avoid getting into unnecessary striking exchanges and pick his moments to close the gaps and outstrike Rodrigo.

Just like Nascimento, Tanner has the power to shut the lights out of his opponents. But he needs to fight smartly and grind out a decision to win because of his size disadvantage. In the end, despite concerns over Rodrigo’s gas tank and speed, one can expect him to overwhelm The Bull Doozer with his power and finish him as the fight progresses.