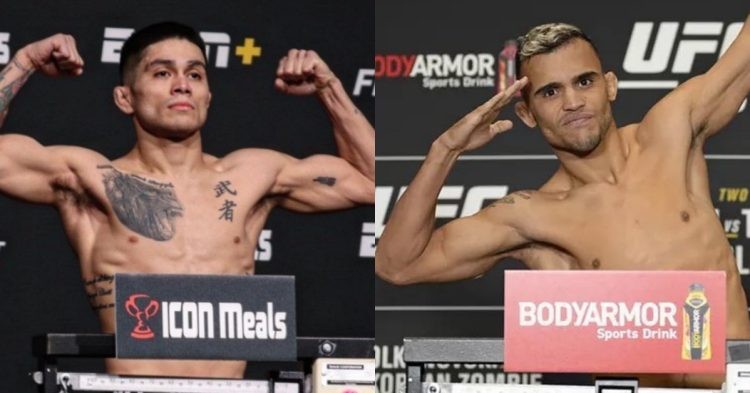 John Castaneda vs Daniel Santos will go down on the main card of UFC Vegas 61. The card features many great fighters like Randy Brown, Sodiq Yusuff and Mike Davis. However, the main event will put the focus on the women’s strawweight division. Top-ranked fighters Mackenzie Dern and Yan Xiaonan will fight for a potential crack at the title next.

Daniel Santos is just 1 fight into his UFC contract. His debut fight came against Julio Arce at UFC 273. He failed to make an impression in his first fight as Daniel lost the fight via unanimous decision. However, he will have the chance to pick up his first UFC win against Castaneda this weekend.

Daniel’s opponent John Castaneda is fresh into his UFC contract as well. Since signing for the UFC in 2020, he has fought 3 times in the promotion with a record of 2-1. However, he fought at Dana White’s Contender Series in 2017 where he beat Cheyden Leialoha. Despite the win, he had to wait 3 more years to join the Ultimate Fighting Championship (UFC).

John Castaneda has 8 knockouts and 6 submissions in his career. He is very well rounded and taking a look at his career stats will prove just that. He lands 4.38 strikes per minute and averages 0.65 strikes per fight. Although he absorbs 4.53 strikes per minute, he tackles it with level changes and grappling. While he knocked out Eddie Wineland via KO to earn his first UFC win, Castaneda submitted Miles Johns in his last fight.

Daniel Santos has 4 knockouts and 2 submissions in his career as well. He was outstruck in his first UFC fight. Although Santos landed 49 strikes, he attempted 229. But he did have a 100% takedown defence in the fight. The lacklustre showing in the fight can be chalked up to the pressure of his UFC debut.

Fans can expect him to be much better heading into his second bout in the Octagon. However, he will be the underdog heading into the clash this Saturday. The lack of experience in the Octagon will definitely work against him. On top of that, he is new to the sport as well. Hence John Castaneda will the favourite to win this weekend.