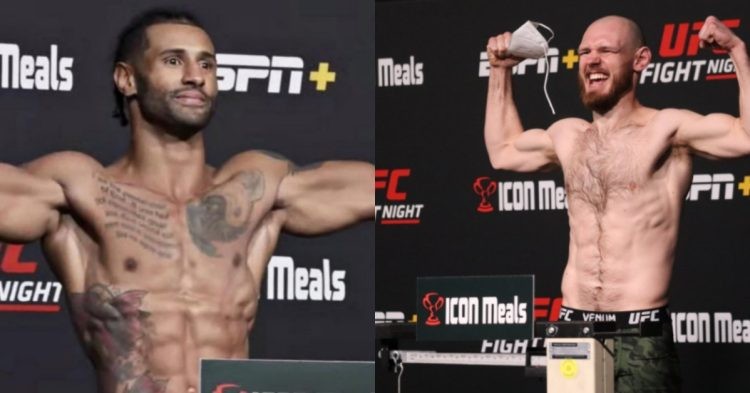 Yan Xiaonan will fight Mackenzie Dern in the headlining bout at UFC Vegas 61. The bout has title implications as the winner will be eyeing a title shot next. However, the night will kick off with a lightweight fight between Mike Davis and Viacheslav Borshchev. The unranked fighters are set to open the night with a 3 round fight.

Mike Davis, who started his MMA career in 2015, fought at Dana White‘s Contender Series in 2018. Although he had a great fight against Sodiq Yusuff who also features on the card, Davis had his chance to fight inside the Octagon for UFC main roster in 2019. His first opponent was Gilbert Burns, who was fighting at 155lbs at the time.

Davis did not start off his UFC run on a winning note as he was choked out by Gilbert in the second round. But since then, he has managed to win two successive fights against Thomas Gifford and Mason Jones. However, there was an almost two-year gap between the fights. He fought Gifford in 2019 and Jones in January of 2021. Then he took another gap of a year before accepting the bout against Viacheslav Borshchev.

Nicknamed ‘ Slava Claus,’ Viacheslav Borshchev has a record of 1-1 on the UFC main roster. However, he knocked out Chris Duncan in DWCS prior to that. He only started fighting in 2019 and has a record of 6-2. Out of the six wins, Viacheslav has 5 knockout wins. It just gives the fans an idea about what to expect when the Russian fighter steps inside the cage.

With an average of 2.85 strikes landed per minute, Borshchev is more of a sniper who picks his shots instead of getting into an outright brawl. But, he does absorb 2.64 strikes in the process as well. But takedowns are his weakness, as he has been taken down 13 times in his last two fights. Mike Davis can exploit that as he averages 2.5 takedowns in his last two fights.

But, Mike is not afraid of getting into brawls either. The 29-year-old, who has 7 knockout wins in his career, is not afraid of a firefight! He absorbs 6.76 strikes per minute and dishes out 6.24 strikes at the same time. Hence, implementing takedowns is going to be crucial against Viacheslav. Judging both of their last 2 fights, Mike Davis is the smart pick to win this weekend.