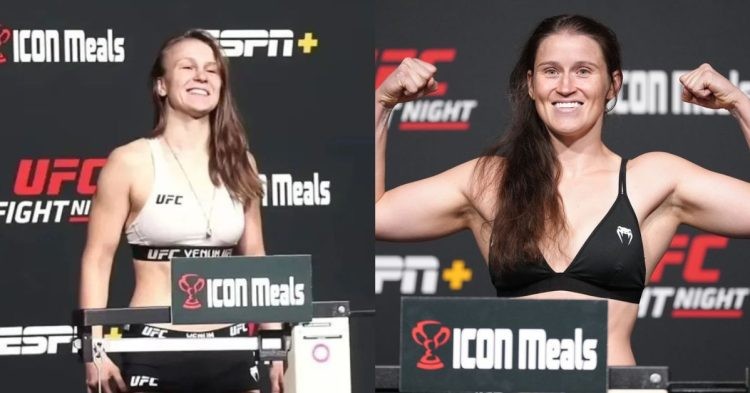 UFC Vegas 61: Dern vs Yan might not feature the biggest of names on the card but it sure has several exciting matchups that will keep the fans on the edge of their seats. One such matchup is the women’s catchweight bout Julija Stoliarenko and Chelsea Chandler which will take place in the prelims of the event.

Chelsea Chandler will make her highly anticipated UFC debut against Julija Stoliarenko who is currently struggling to pick up wins consistently. However, Julija managed to secure her first UFC win in her last fight as she submitted Jessica Rose Clark to snap her four-fight losing streak.

With that being said, it would be interesting to see whether Stoliarenko manages to spark a remarkable turnaround in her UFC career by making a statement against a bright prospect. As we move ahead let’s compare the stats of the two female fighters that will compete in the catch weight bout at UFC Vegas 61.

Apart from her recent win against Jessica Rose Clark, Julia Stoliarenko has struggled against all her opponents in the UFC. In this matchup, she faces Chelsea Chandler who has great knockout power. So we can anticipate Stoliarenko to go aggressively for the takedowns and establish her superiority.

With no physical advantage or striking prowess as good as Chandler, Julia’s path to winning would be to grind out a decision win with her wrestling skills. However, she needs to be careful as Chandler is good at defending takedowns and is a threat on the ground.

What’s more interesting is the fact that the debutant is training at Cesar Gracie and it is needless to say that it would sharpen her jiu-jitsu skills. Although rather than showing off her grappling skills, Chelsea Chandler would try to get on the front foot and deliver a spectacular knockout. So we can expect her to go striking heavy and strive for a finish at UFC Vegas 61.