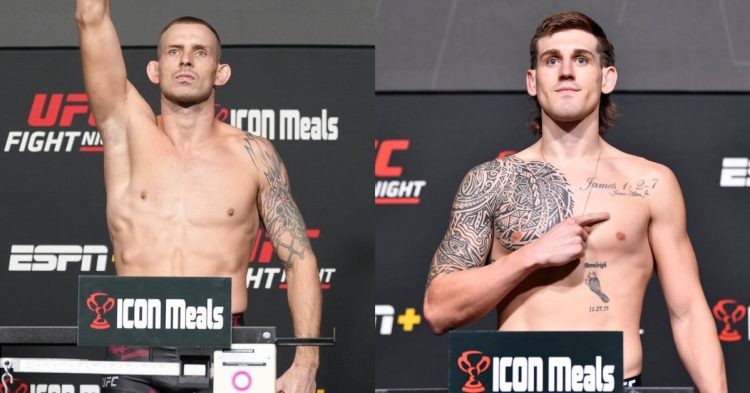 UFC Middleweight contender Brendan Allen will be back in action this weekend on October 1st as he takes on Krzysztof Jotko in a three-round bout scheduled on the prelims of the UFC Vegas 61: Dern vs Yan event.

Leading into this bout, both the middleweights are off a win in their last bout with Allen picking up a dominating unanimous decision win over Jacob Malkoun at UFC 275. Similarly, Jotko outclassed Gerald Meerschaert in all departments throughout the three rounds to grab a unanimous decision win.

Despite being on a good run, Brendan Allen and Krzysztof Jotko have not been able to break into the top 15 of the division. However, a win at UFC Vegas 61 would most likely help them get one step closer to the rankings. As we move ahead let’s compare the stats of these two middleweights that will collide inside the octagon.

Fight fans can expect a brutal war from this middleweight bout between Krzysztof Jotko and Brendan Allen as they are evenly matched up. On the feet, Jotko would most likely have an upper hand due to his reach advantage and his striking defense.

Meanwhile, Brendan Allen is a much better grappler than Jotko and he will have an edge in that department. Therefore we can expect him to go for the takedowns as that is the best way for him to outclass the Polish middleweight. However, it would be difficult to control Jotko on the ground as he is good at defending takedowns.

So one can expect this matchup to be decided on striking. Interestingly, despite having a greater striking output and accuracy, Brendan Allen’s over-aggressive approach has been his downfall in the past and Jotko’s technical skills in striking will help him take advantage of his opponent’s drawback in this bout.