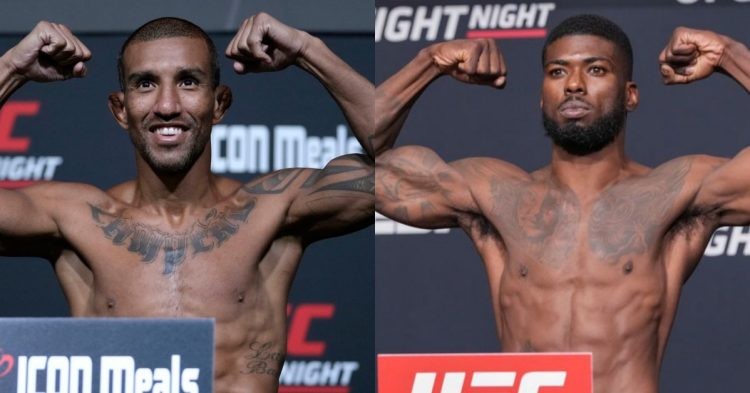 UFC will return to Apex for this weekend’s event, UFC Vegas 61. In the main event, Yan Xiaonan will be fighting Mackenzie Dern in a crucial strawweight fight. With the champ Carla Esparza fighting Zhang Weili, the winner this Saturday may very well end up becoming the next contender. However, it also features other great fights as well, Raoni Barcelos vs Trevin Jones for example.

Raoni Barcelos has lost both of his previous fights. His first loss came against Timur Valiev in June of 2021 via decision. Barcelos also lost to Victor Henry in his last fight at UFC 270. After an absence of 8 months, he returns to the action against Trevin Jones on October 1st.

Nicknamed, ‘5 star,’ Trevin Jones also has not had the best performances in his last two fights either. While he lost via decision against Javid Basharat in his last fight, Jones was submitted by Saidyokub Kakhramonov via guillotine choke in the fight before that. But unlike Raoni, Trevin has fought more recently as his last fight was in March this year.

The bantamweight fight is slated for three rounds this weekend. Both Trevin Jones and Raoni Barcelos are experienced campaigners. Although he only made his UFC debut in 2018, Barcelos already had a good career prior to that. He won the featherweight championships at RFA and Shooto Brazil. Although his first UFC fight came at 145lbs, the rest of his UFC career has played out in the bantamweight division.

Trevin Jones, on the other hand, came into UFC in 2020. However, Jones’ UFC run so far has been pretty disappointing. With a record of 1-2-1, the 32-year-old needs to get his career back on track as soon as possible. He has managed 7 finishes in his career, 3 via KO/TKO and 4 via submission.

Jones lands 2.90 strikes per minute and takes 5.00 strikes on average. He also averages 0.71 takedowns per fight. But his stats do not hold up against his opponent this Saturday. Raoni Barcelos secures 1.66 takedowns per fight with a 43% accuracy. But where he stands clear of Trevin, is in his striking stats. The 35-year-old absorbs 5.64 strikes while landing 5.98 per minute.

If we look at both of Barcelos’ last 2 losses, he was outstruck in both. Valiev landed 77 strikes as opposed to Raoni’s 69. So was the case against Henry where the BJJ black belt landed 134 strikes, while his opponent landed 181 strikes. However, that threat will not be present against Trevin Jones. So Raoni is the smart pick to win the fight.