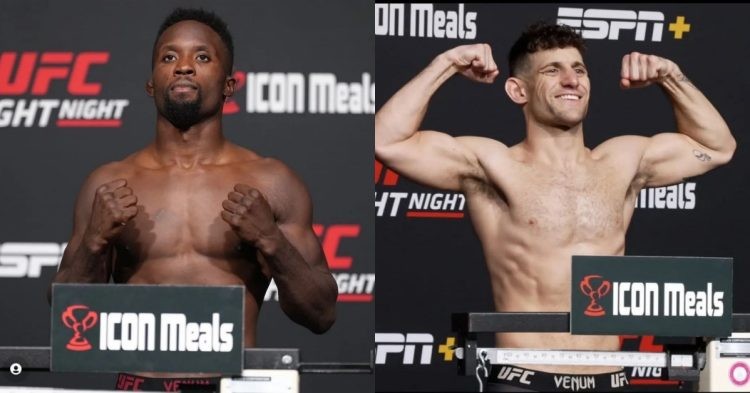 Featherweight prospect Sodiq Yusuff will take on Don Shainis on the main card of UFC Vegas 61. The fight is scheduled for 3 rounds and it will be the perfect test for Yusuff who just tasted defeat for the first time in his UFC career against Arnold Allen in April of 2021. In his last fight, Sodiq defeated Alex Caceres via unanimous decision.

Don Shainis will be making his debut in the UFC with this fight. However, he is not to be taken lightly as he has won two championships in other promotions before his UFC debut. He fought for Bellator, Cage Titans and FAC. In the latter two promotions, Don has held the featherweight and lightweight championships respectively.

So which fighter will come out on top? Can Sodiq Yusuff build on his 5 wins inside the Octagon and continue to be a force inside the featherweight division? Or, will Don Shainis be the next big thing in the UFC? Let’s compare their stats and find out who may come out on top this weekend.

Sodiq Yusuff was introduced to the world of UFC via Dana White‘s Contender Series. He defeated Mike Davis in the series in 2018 in an entertaining fight.

After that, he went on a four-fight win streak which included two KO/TKO against Suman Mokhtarian and Gabriel Benitez, the former earned him a ‘Performance of the Night’ bonus in December of 2018. However, his win streak in the promotion ended against Arnold Allen who outclassed him.

He lands 5.22 strikes per minute and absorbs 3.63 strikes. While he has a strike accuracy of 48%, Yusuff also has a striking defence of 57%. So he is obviously a great striker. Although he does not excel at grappling, he is yet to be submitted in his career. But his opponent, Don Shainis has 2 submissions and 8 knockouts in his career.

He has a record of 12-3 and the majority of his finishes have come in the first round. So the first 5 minutes of the bout are bound to be very interesting. Both fighters have great power behind their strikes. But Shainis has the better wrestling credentials in the sport. However, Yusuff has the experience of fighting in the Octagon, so it gives him a slight advantage this Saturday.