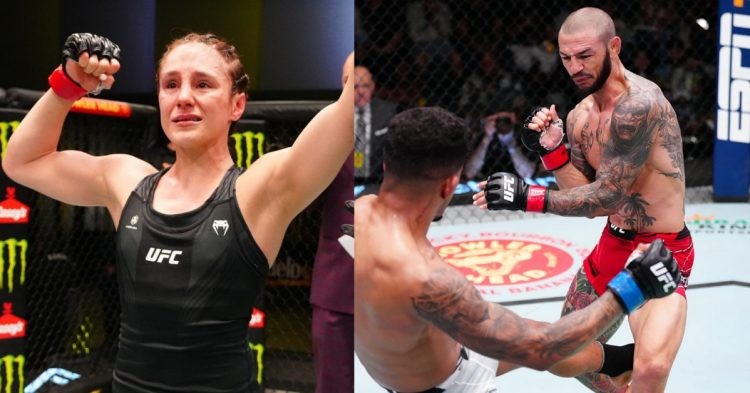 UFC Vegas 62 saw Alexa Grasso and Viviane Araujo going at it in the main event. The no. 6 ranked women’s flyweight fighter, Araujo took on Grasso, who was placed one place ahead of her at fifth. With the division rapidly running out of contenders for the champ Valentina Shevchenko to face, the winner of this fight could possibly get a title fight next.

Since moving to the 125lbs division, Alexa had won three consecutive fights. She had beaten Ji Yeon Kim, Maycee Barbar and Joanne Wood. Araujo, on the other hand, had won 3 out of her last 4 fights. But that is not it, the co-main event featured Cub Swanson’s move to bantamweight against Jonathan Martinez.

The main card was rounded out by the likes of Raphael Assuncao taking on Victor Henry, Misha Cirkunov vs Alonzo Menifield and Jordan Wright vs Dusko Todorovic. So how did the fights play out and who got the big wins? Let’s find out.

● Alexa Grasso beats Viviane Araujo (main event): It was the first time for both Alexa Grasso and Viviane Araujo to headline a UFC event. But the women did not let the pressure of the moment get to them and put on a great show for the fans. They went the distance and it was Alexa Grasso who walked away with the win.

The judges scored the fight 49-46, 49-46 and 50-45 for Grasso. It was not so surprising as the fight mostly took place on the feet and Alexa dominated it. She outlanded Araujo by a massive margin. In the fight, Grasso attempted 223 strikes and landed 124.

In contrast, Viviane attempted 165 strikes and landed 86. Alexa was successful in landing 104 significant strikes, while Araujo only had success in landing 77. But the latter did successfully manage to take Grasso down twice. Ultimately Grasso showed why she can be a player in the 125lbs division at UFC Vegas 62.

● Jonathan Martinez beats Cub Swanson (co-main event): Cub Swanson wanted a change in his fighting career as the veteran featherweight fighter moved down in weight at UFC Vegas 62. However, it did not go exactly as he planned it would. Despite finding some early success, Swanson ultimately fell to Martinez’s leg kicks.

Jonathan dropped Cub to close out the first round. He got the stoppage at the end of round 2. However, it was not the traditional knockout that fans are used to seeing. Martinez’s investment of kicking Swanson paid off as Cub ultimately had enough before going down at the 4:19 minute mark of the second round.

After an all out brawl with Jordan Wright, Dusko Todorovic came out on top at #UFCVegas62 👏 pic.twitter.com/4tGYEqQiTY

Dusko landed 61 significant strikes in the two rounds, whereas Wright only managed 25. Wright’s superior ground skills ultimately did not matter as Todorovic lived upto his nickname Thunder and got the stoppage. Following a disappointing loss to Chidi Njokuani, it was a nice bounce back for the 28-year-old.

● Raphael Assuncao beats Victor Henry: Raphael Assuncao was under a lot of pressure heading into this event. He was on a 4-fight losing streak which saw him getting finished 3 times. So he had to win against Victor Henry by hook or crook. The veteran showed his experience and won the fight via decision.

Respect to him and Victor Henry 🤝 #UFCVegas62 pic.twitter.com/0HhYYvhQr1

Assuncao landed 78 strikes as opposed to Henry’s 61, while 61 of the former’s strikes were significant ones, the latter landed 55 significant blows. On top of landing more strikes, the 40-year-old landed two takedowns as well.

With this win, Menifield has built up a very nice streak of results for himself. Alonzo has now won 4 out of his last 5 UFC fights and among the four wins, 3 came via stoppage. Hence, it is a good foundation for him to build upon.