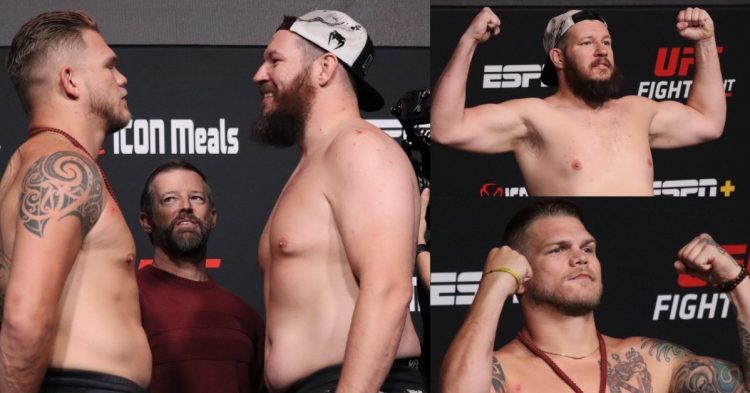 UPDATE: The bout will no longer take place as Josh Parisian pulled out of the contest in light of a heart-related issue.

Chase Sherman and Josh Parisian will face each other at UFC Vegas 64. The heavyweight fighters will fight on the main card, as Marina Rodriguez and Amanda Lemos will headline the event. Welterweight contenders Neil Magny and Daniel Rodriguez will also feature on the card and duke it out in the co-main event. The fight night will take place inside the UFC Apex facility.

Josh Parisian currently holds a 2-2 record in the UFC main roster. But, he impressed UFC President Dana White at DWCS 30 in August 2020. He knocked out Chad Johnson in the 4th minute of the first round itself. On his main roster fights, he beat Roque Martinez and Alan Baudot and lost to Don’Tale Mayes and Parker Porter.

Chase Sherman, on the other hand, is coming off a big victory over Jared Vanderaa in July earlier this year. Although it did not have a title implication, it was very significant for Chase’s career. Prior to that bout, he lost 4 fights back to back. So he was under immense pressure to deliver and he did! Sherman knocked out Jared in the third round of their bout.

So who is going to get his hand raised with two behemoths going at it? Let’s compare the stats and find out!

Will Sherman vs Parisian end in a knockout at UFC Vegas 64?

When two heavyweight fighters are locked inside the Octagon, more often than not, they put on entertaining fights. Taking a look at Chase Sherman and Josh Parisian’s finishing rates just proves why heavyweight fighters are so exciting to witness. Sherman has 15 KO wins and Josh Parisian has 11 knockout victories. So fans can expect fireworks when they eventually fight.

Parisian is not afraid to absorb strikes to land punches of his own. He lands 4.97 strikers per minute inside the Octagon and absorbs 5.11 strikes at the same time. But, he mixes in some takedowns as well. Josh manages to land 1.06 takedowns per fight and has 2 submission wins in his career. It may be a significant advantage heading into a fight against Chase Sherman.

Sherman’s 4-fight losing streak included 2 submission losses. So Parisian will definitely look to secure a takedown, instead of getting into a brawl. But, he will have to go through a barrage of heavy punches from Chase Sherman. Sherman both lands and absorbs 6.51 shots per minute. Hence, there is a chance Sherman lands a big punch and hands Parisian a KO loss.

However, the better ground game certainly gives Josh Parisian the edge over Chase Sherman at UFC Vegas 64. Chase has 10 losses on his record including 4 KO losses and 2 submission losses. So it just goes to show that Parisian has more tools to succeed against Sherman. Hence, he should be the favourite to win this weekend.