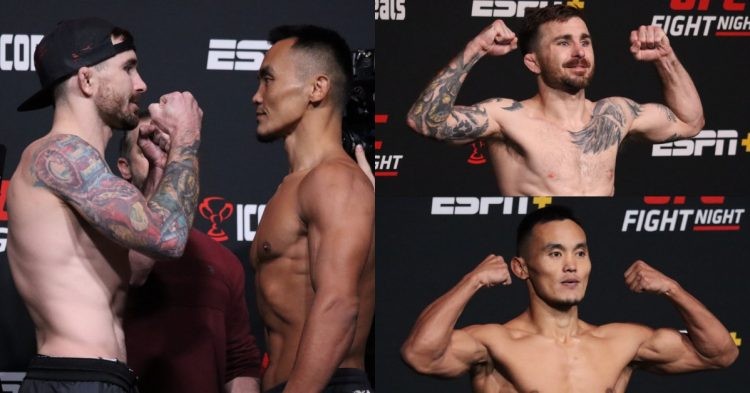 Darrick Minner is set to fight Shayilan Nuerdanbieke in the prelims of UFC Vegas 64. Minner is coming off two losses to Ryan Hall and Darren Elkins. Shayilan, on the other hand, beat TJ Brown and Sean Soriano in his last two fights. He can extend his winning streak to 3-fights against Darrick Minner this weekend.

Nuerdanbieke only has 3 fights in the promotion and has a record of 2 wins and 1 loss. He made his debut against Joshua Culibao in May of 2021. But, he lost the fight via unanimous decision. He then beat Brown and Soriano back to back as he made an emphatic comeback.

Darrick Minner joined the UFC in February 2020. However, Minner failed to make an impression on the fans as he lost to Grant Dawson via submission. Although he beat T.J. Laramie and Charles Rosa, Hall and Elkins got the better of Minner in his last two outings to the Octagon.

So who comes out on top between Minner and Shayilan? Let’s find out!

Can Shayilan Nuerdanbieke continue his momentum against Darrick Minner?

Darrick Minner has 39 fights under his belt, while Shayilan Nuerdanbieke has 48! So none of them lacks any experience in how to tackle adversities in the cage. Minner is a prolific grappler with 22 submission wins in his career. Nuerdanbieke is more of a well-rounded fighter, who has 18 knockout wins and 10 submissions. So it proves both fighters have the instinct to go for the finish whenever they get a chance.

The 32-year-old’s first fight in the Octagon was at Dana White’s Contender Series in 2019. He lost to Herbert Burns via armbar. His only submission win in the UFC came against TJ Laramie in September 2020. He averages 2.46 takedowns in his fights and manages to land 2.58 strikes per minute. It shows, he wants to get the bout to the ground as a priority.

Shayilan Nuerdanbieke, on average, lands 3 takedowns per fight. It is slightly higher than what Darrick Minner manages in his fights. Despite their elite finishing abilities, they’re also susceptible to submission losses themselves. Minner has 8 submission losses and Nuerdanbieke has 6. So there is a chance that this fight may play out on the feet.

Both have a history of putting their opponents in trouble with striking. But the fans have not seen that side of either fighter in the UFC Octagon. However, they may finally get to see both men having a primarily striking battle as the style of match-up may not allow them to implement their grappling. If that is indeed the case, then Shayilan Nuerdanbieke will be the favourite to win the bout.