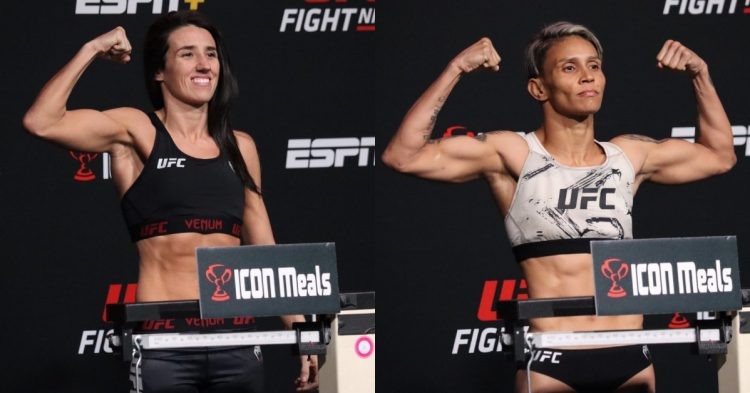 Marina Rodriguez will fight Amanda Lemos in the main event of UFC Vegas 64. The 5-round fight is set to take place in the women’s strawweight division. Rodriguez occupies the 3rd place in the 115lbs division, while Lemos is currently ranked in the 7th place. Hence, the winner of this fight may get a chance to be next in line for a title shot.

Amanda Lemos lost to the former divisional champ Jessica Andrade to kick off the year. But she made a good comeback with a 2nd round submission win over Michelle Waterson in July. Since joining the UFC, Lemos won 6 of her fights with only 2 losses in her 8-fight run.

Rodriguez, on the other hand, beat Yan Xiaonan in her last fight at UFC 272. Marina beat Maria de Oliveira Neta in the Brazilian edition of Dana White‘s Contender Series in 2018 to earn a UFC contract. She currently possesses a UFC record of 6 wins, 1 loss and 2 draws. With wins over Amanda Ribas, Michelle Waterson, Mackenzie Dern and Xiaonan, Marina is an elite contender in the division.

Rodriguez vs Lemos: how does the fight play out at UFC Vegas 64?

Hence, Marina can definitely use her height to land more strikes from a distance than Amanda. But Lemos has a better takedown rate in the Octagon than Marina. Amanda secures 1.07 takedowns per fight, while Marina only has a takedown average of 0.20 per fight. Hence, it is no surprise that Lemos has 3 submission wins as opposed to Marina’s 1.

But Marina is yet to experience a submission loss in her career and possesses a 65% takedown defence. If the bout plays out on the feet, Marina will definitely try to put her better striking skills to use and take out Amanda Lemos. But Lemos also possesses 7 KO wins in her career. So it will not be an easy assignment for Marina.

However, Marina Rodriguez is far stronger than her opponent. As fans saw, Jessica choked out Lemos with a standing arm triangle. The 35-year-old could not cope with Jessica’s physicality. Can she deal with Rodriguez who is much bigger and stronger? Although anything can happen in a fight, Marina Rodriguez seems to be the favourite on paper.