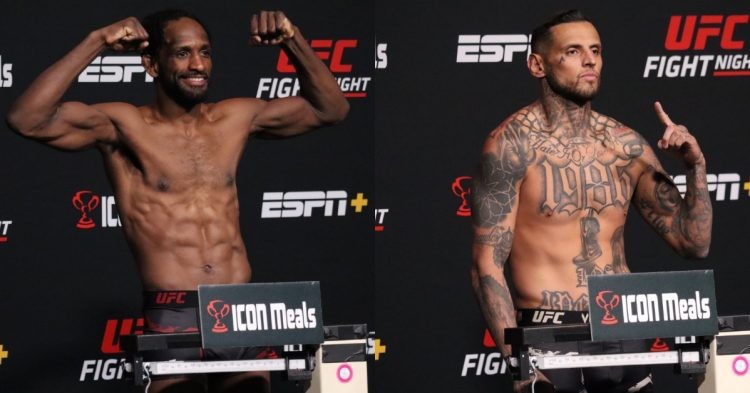 UFC Vegas 64 is set to take place on November 5th. In the co-main event, UFC welterweight fighter Neil Magny will fight Daniel Rodriguez. Rodriguez defeated Li Jingliang at UFC 279 and currently occupies the 14th ranking in the division. On the other hand, 13th-ranked Magny suffered his 10th career loss against Shavkat Rakhmonov in his last fight.

Ahead of the Rakhmonov fight, Magny had a record of 5-1 in his last 6 fights. However, he could not really put up much of a fight against Shavkhat, who is a future title contender. But, he is still a very good competitor and a true veteran. This particular match-up will mark his 29th fight inside the Octagon. It may work as a big advantage as Rodriguez only has 8 fights in his UFC career.

But, in his 8 fights, Daniel has only lost 1. He is currently on a 4 fight win streak and it includes wins over Mike Perry, Kevin Lee and Li Jingliang. Can he beat an experienced campaigner such as Neil Magny? How will the bout play out this Saturday? Let’s find out.

Who gets the upper hand between Magny and Rodriguez at UFC Vegas 64?

Neil Magny is not an easy fighter to beat inside the Octagon, as evident by his record. Although he has 7 KO/TKOs and only 3 submissions, Magny is a really strong grappler. In his 28 UFC appearances, the 35-year-old has managed to secure 53 takedowns and averages 2.31 takedowns per fight. It is certainly an astonishing record. As his 7 KO wins suggest, Neil’s striking is also pretty decent.

Even though he is not the most powerful striker in the world, Neil Magny does find his space to land shots which puts his opponents in peril. But, at the same time, he struggled against someone like Santiago Ponzinibbio, who is a much more polished striker. The Haitian Sensation lands 3.59 strikes per minute. But, it pales in comparison to Daniel Rodriguez, who lands 7.75 strikes at the same time.

D-Rod will have a 2-inch height disadvantage and a 6-inch reach disadvantage. However, his volume may just be a bit too much to handle for Magny. In terms of grappling, Daniel has 4 submissions as well. He has a purple belt in BJJ under Miguel Torres and Andre Leite. So Nate Diaz’s teammate will be well prepared to handle Neil’s tricky grappling skills.

Hence, Daniel Rodriguez should be the favourite to win the fight. Not only is he a better striker, but he possesses a good skillset to counter Neil Magny’s fight style. However, Magny is a very experienced fighter who has won fights despite being an underdog. So, it is going to be a very exciting fight this weekend.