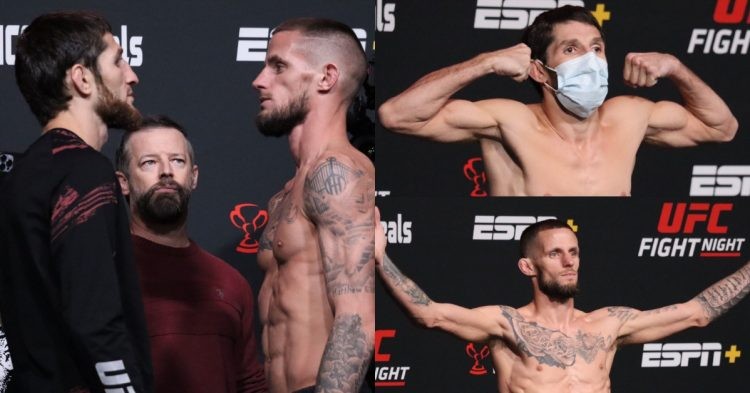 UFC men’s flyweight fighters Tagir Ulanbekov and Nathan Maness will be in action at UFC Vegas 64. Neither Ulanbekov nor Maness have a place in the rankings. But that may very well change for the winner of the fight this weekend. While Tagir lost to Tim Elliott in his last fight, Nathan fell short against the unstoppable Umar Nurmagomedov in his previous foray into the cage.

Tagir Ulanbekov, much like his opponent, only has 2 losses in his career. His UFC debut came in 2020 against Bruno Silva, whom he beat via unanimous decision. He also held flyweight championships in promotions like GFC and Fight Night Global. Ulanbekov proved in other promotions that he is a capable fighter. So he will look to bounce back with a win on Saturday.

Tagir Ulanbekov is a great grappler, who has 7 stoppage wins in his career and all of them came via submission. Inside the Octagon, the Russian fighter lands 3.67 takedowns per fight. He has landed 11 takedowns in total in his 3 UFC bouts. Aside from Tim Elliott, nobody ably handled Tagir’s grappling so far.

Umar landed 74 strikes on Maness and the Tennessee native managed a mere 2 strikes in reply. But he does secure 1.01 takedowns per fight with 75% accuracy. He has 3 submissions under his belt. But, surprisingly he also managed 5 KOs as well. He knocked out Tony Gravely in his 3rd UFC fight. So he does have the capability to hold his ground against the right opponents.

Nicknamed Mayhem, Nathan Maness is around 5’10. He is unusually tall for the 125lbs division. This will be his first fight in this weight class. So it will be interesting to see whether such a drastic cut would compromise his ability to fight or not. If he does not rehydrate properly, one big punch from Tagir Ulanbekov may end the night early for Maness.