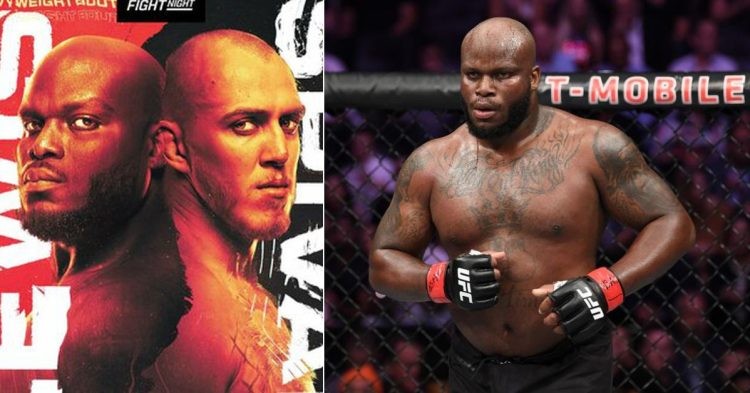 Just hours away from UFC Vegas 65 main card, Derrick Lewis vs Sergey Spivak was canceled due to a medical issue with Lewis, per broadcast. The UFC confirmed it to be a non-COVID issue related to Lewis with Kennedy Nzechukwu vs. Ion Cutelaba now serving as the main event in a three-round fight.

Heavyweights ready to throw at #UFCVegas65

Needless to say, this is a huge blow to the event that did not boast many big names on the main card. Lewis was returning from a first-round stoppage loss to Sergei Pavlovich and looked in great spirits to jump back to the winning column ahead of the fight.

27-year-old Spivak was on a two-fight winning streak and had looked incredible in his last few outings. It goes without saying, this is quite disappointing for Spivak, who was gearing up fo this first UFC main event.

What happened to Derrick Lewis?

There isn’t any confirmation regarding what exactly went wrong with Lewis resulting in the cancellation of the UFC Vegas 64 main event. However, we do know that the illness is non-COVID or weight-cut-related.

Brendan Fitzerald announced during the UFC Vegas 65 live broadcast, “We have some unfortunate news to share with you. Our main event was to be Derrick Lewis vs Sergey Spivak. There is a non-COVID, non-weight-cutting illness on the Derrick Lewis side. So our main event today has been canceled.”

The #UFCVegas65 main event is officially cancelled due to illness.

We wish Derrick Lewis a speedy recovery and hope to see both back in there soon! 🤞 pic.twitter.com/cC3nuGblnT

“You feel for Derrick Lewis, you feel for Spivak too because this is his huge moment. This is his coming out party in the heavyweight division to go out there.” Paul Felder shared his thoughts after the announcement.

Hours before the cancellation of the fight, there were rumors that Derrick Lewis was in the hospital and upon returning wanted to continue with the fight. However, he was medically unfit and was not cleared to fight.

It was confirmed after the conclusion of UFC Vegas 65 that Derrick Lewis suffered a stomach illness and is now medically cleared to compete again. It’s safe to say that the UFC will reschedule the fight as soon as possible.