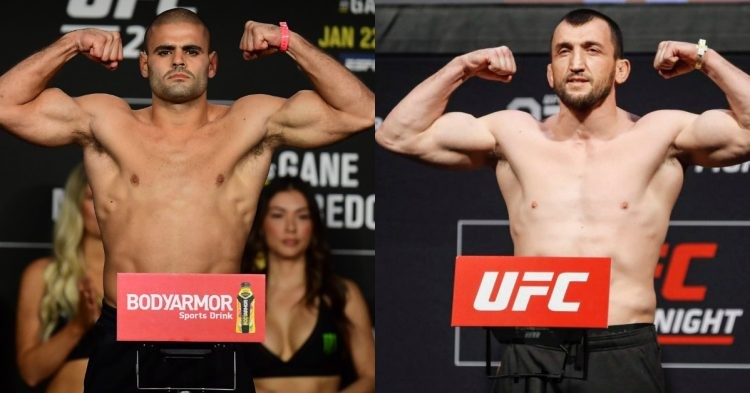 UFC Vegas 65 will feature the welterweight bout between Andre Fialho and Muslim Salikhov. The bout will take place in the main card and it is scheduled for three 5-minute rounds. Andre is coming off a knockout loss against Jake Matthews at UFC 275, while Salikhov lost his last fight to Li Jingliang in July.

Muslim Salikhov made his UFC debut against Alex Garcia in 2017. After losing his debut bout against Alex, he went on a five-fight win streak which saw him beat fighters like Laureano Staropoli, Elizeu Zaleski dos Santos, and Francisco Trinaldo. But his incredible run came to an end against Li Jingliang.

Andre Fialho, on the other hand, is relatively new in the UFC with only 4 fights in the company. Much like Muslim, Andre also lost his first fight in the UFC against Michel Pereira. But he then won two back-to-back wins over Miguel Baeza and Cameron VanCamp. But he then lost to Jake Matthews via second round KO against Jake Matthews at UFC 275. So how does the bout play out on the weekend? Let’s find out.

Fialho vs Salikhov: who has the better chance to get win this weekend?

Andre Fialho has 16 career wins, while Muslim Salikhov has 18 victories in his career. But, the interesting stat about their record is their finishing rate. Andre has 13 wins via KO and 1 win via submission so far. Muslim has 12 KO wins and 2 submissions. So fans can expect an amazing bout this Saturday when the two fighters are locked inside the Octagon.

All of Fialho’s last 3 bouts ended in KO/TKO. As per UFC stats, the 28-year-old has an average of landing 3.78 strikes per minute in the Octagon. However, his opponents get an ample amount of opportunities to land against him. They land an average of 6.55 strikes on him. Despite that, he only has 3 KO losses in his career. So he does have a good chin. His only submission win came against Nuno Faria in the second bout of his career.

But, Muslim Salikhov has a better striking stat in comparison to his opponent this weekend. Although Salikhov lands only 3.04 strikes per minute on his opponents, he only absorbs 2.56 strikes per 60 seconds. In his UFC run, Muslim knocked out Ricky Rainey and Nordine Taleb. However, 3 of his 4 decision wins have also come in the UFC.

But, perhaps what gives Muslim Salikhov the advantage this weekend, is his grappling stats so far. Salikhov averages 1.17 takedowns per fight. It is a lot considering Andre Fialho’s takedown average of 0.00. So Fialho has not shown the grappling side of him in the UFC so far. On top of that, Salikhov only has 1 KO loss in his entire career. Hence, he will also be more confident, in case the fight turns into a brawl.

So, it does appear that Muslim Salikhov has better odds of winning compared to Andre Fialho. However, Andre will be the bigger and younger competitor. He will have a big reach advantage as well, which may help him stuff takedown attempts. But, Salikhov has more tools to win this Saturday.