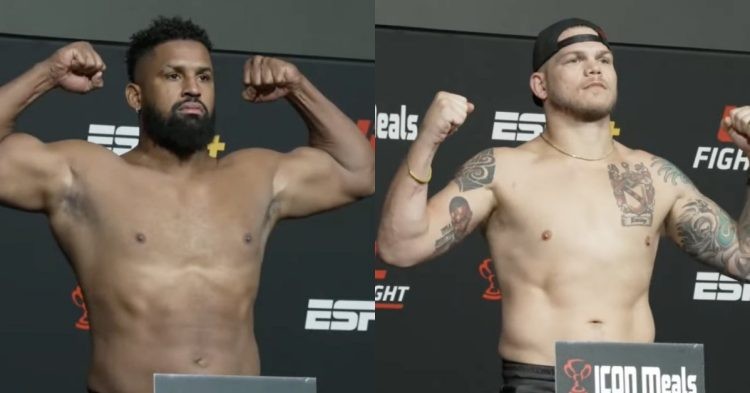 Chase Sherman makes a quick turnaround at UFC Vegas 65 this weekend. He was previously scheduled to fight Josh Parisian at UFC Vegas 64. But Josh had to withdraw from the fight due to some health concerns. Only two weeks later, Chase is ready to fight and he will take on Waldo Cortes-Acosta. The heavyweight fight will take place on the main card of the event.

Waldo Cortes-Acosta beat Danilo Suzart via first-round KO in August of this year. After his highly impressive performance at Dana White‘s Contender Series, Waldo made his UFC main roster debut in October against Jared Vanderaa. Although he could not knock out the UFC veteran, he put on a great show and maintained his undefeated status.

But he will face a tough challenge against Chase Sherman. Nicknamed “The Vanilla Gorilla,” Sherman has not been the most successful fighter in the UFC. As a matter of fact, he only has 4 wins out of his 13 outings inside the Octagon. After beating Ike Villanueva on his UFC return, he lost 4 successive bouts. But, he somewhat recovered after beating Jared Vanderaa in his last fight.

Can Cortes-Acosta remain unbeaten against Sherman at UFC Vegas 65?

Chase Sherman is currently on his second stint in the UFC. His first run in the UFC ended when he lost 5 of his 7 fights in the UFC. His only two wins on his first run came against Rashad Coulter and Damian Grabowski in 2017. But he also lost to fighters like Walt Harris, Shamil Abdurakhimov, and Augusto Sakai.

His losing record also followed him in his second UFC run, where he lost to Andrei Arlovski, Jake Collier, and Alexander Romanov. In total, Chase Sherman has a UFC record of 4-9. But, records do not always tell the entire story and it rings true in Sherman’s case. He has finished 15 of his opponents via knockout in his career. Among his 16 wins, only once the bout went the full distance.

It proves how dangerous the 33-year-old is on his feet. Not a lot of fighters have the one-punch KO power, but Chase Sherman does and it is evident from his record. But, he struggles whenever he comes across a more well-rounded fighter. Waldo Cortes-Acosta has a background in boxing. Although his boxing career did not go according to plan, he is thriving in MMA.

His MMA debut was against Odell Pantin in 2018. He finished Pantin via second-round KO. In his relatively new MMA career, Waldo has 4 KO wins and 1 submission win. As per UFC stats, he has an average of landing 6.21 strikes per minute, while only absorbing 3.80 strikes in the same period. He also holds a 100% takedown defense.

His opponent, Chase Sherman, does manage to match him in terms of landing strikes. Sherman has a slightly better landing average of 6.51 per minute. But, he doesn’t have the same defensive accuracy that the “Salsa Boy” has.

Sherman also concedes 6.51 shots per minute. So Sherman has a striking differential of 0. With the kind of power, Waldo Cortes-Acosta possesses, he should be the favorite to win this Saturday.