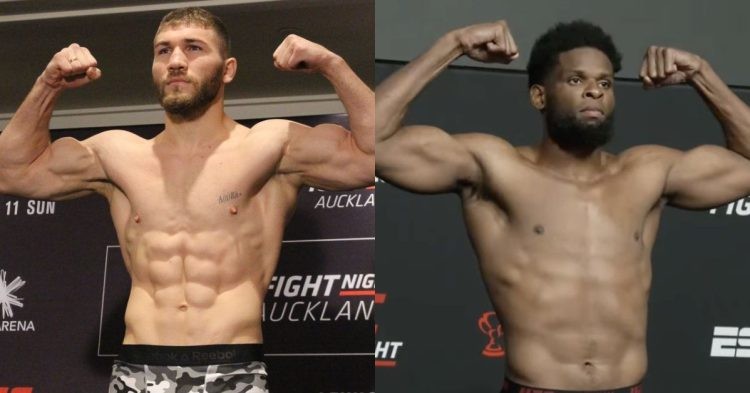 The co-main event of the UFC fight night this weekend at the UFC Apex involves two light-heavyweights. The bout will be fought between two fighters ranked outside of the top 15, Ion Cutelaba and Kennedy Nzechukwu. Coming off of some rough nights at the office, the two fighters look to add to their resume and redeem their losses.

Ion Cutelaba has gained a reputation for being really intense at face-offs. Unfortunately for him, his performances have not resonated with his intensity. Cutelaba has lost four out of his last five fights, and three of those have come by a finish. At this point, both his career and his ability to take punches is in serious doubt.

Even though Kennedy’s last fight was a win, he has gone through a rough patch recently. Having lost two out of his last three fights, he can use this opportunity to repair the damage caused by a couple of losses.

Going by what we’ve seen from Cutelaba recently, the chances of him putting up a great performance may seem slim. He has lost fights in quick succession, going on a downfall at merely 28 years of age. The losses have come by KO/TKO, submission, and decision. This indicates that Cutelaba has to improve pretty much every aspect of his game to stay in contention.

In his last outing, he was submitted in a quick manner by Johnny Walker. His two fights against contender Magomed Ankalaev were short, with Cutelaba losing by TKO in the very first round. The fight loss was a bit controversial as Cutelaba was allegedly just ‘acting’ wobbled by Ankalaev’s punches. In the second fight, Ankalaev cleared all doubts by putting Cutelaba away early in the fight via knockout.

Kennedy has been doing relatively better, relatively being the keyword. But it would be important to mention that he has not been using his physical attributes as good as he can. Despite being taller than most of his opponents, and having a bigger wingspan, Nzechukwu has not been utilizing those attributes. In his fight against Da-Un Jung, He stood toe-to-toe and traded shots which led to him getting knocked out cold. If he plays to his strengths, he can make it a really long night for Cutelaba.