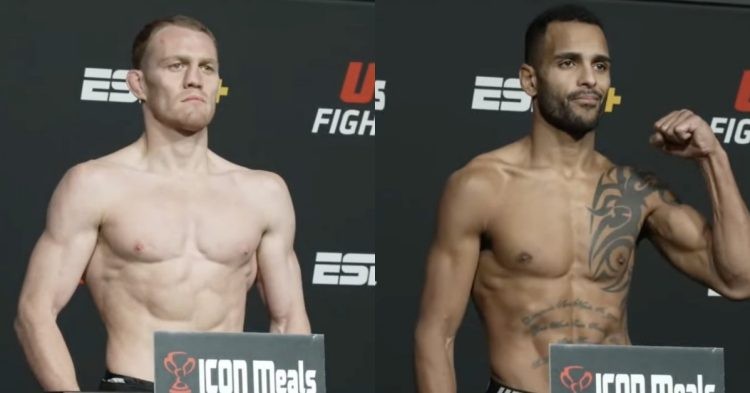 UFC Vegas 65 will take place on November 19th inside the Apex facility in Las Vegas. The card will feature a highly entertaining fight between Derrick Lewis and Sergey Spivak in the main event. The card also has a lot of great match-ups and one of them is between Jack Della Maddalena and Danny Roberts.

This particular bout will kick off the main card this weekend and it will take place in the welterweight division. Jack Della Maddalena had a bad start to his MMA journey. He lost both of his first two professional bouts. But, since then, Jack has not tasted defeat. He beat Ange Loosa at Dana White‘s Contender Series in 2021.

Della Maddalena then made his UFC debut against Pete Rodriguez at UFC 270, via first-round KO. Jack followed it up with another spectacular stoppage win against Ramazan Emeev at UFC 275. The 26-year-old is on an unbeaten run of 12 fights. He looks to continue this amazing form against Danny Roberts this weekend at UFC Vegas 65.

Danny Roberts is an experienced fighter, fighting out of London, England. He first had the opportunity to fight for the UFC in 2015. Danny beat Nathan Coy via submission in the first round on his debut. Although he has a decent record in the promotion, Danny never managed to build up a good run of fights in the UFC. Robert has a UFC record of 7-5.

But, something that is undeniable, is his experience. At the age of 35, the British fighter has 12 UFC fights and 24 bouts in total. Hence, he is vastly more experienced than Jack Della Maddalena, who only has 2 main roster fights in his UFC run. Nicknamed “Hot Chocolate,” Danny Roberts has 8 KO/TKOs and 5 submission victories. So Jack will certainly face a tough challenge.

As per UFC stats, the London native only has a takedown average of 0.26, with an accuracy rate of 11%. In terms of striking, Roberts absorbs more strikes than he lands. The 35-year-old absorbs 3.32 strikes and lands 3.13 strikes per minute. But, that may be a sign of trouble against Jack Della Maddalena. Jack averages an obscene 8.24 strikes per minute.

However, his absorption rate is also quite high with 4.68 strikes per minute. Della Maddalena has one KO loss in his career, which came in the very first fight of his career. Since then, he beat 11 of his opponents via stoppage, with 10 KO/TKOs and 1 submission win.

Although he has a size disadvantage, Jack Della Maddalena should be the favorite to win over Danny Roberts. Jack is significantly younger and has less mileage. He will be more durable and agile inside the Octagon. Hence, he looks to be in better condition than Roberts at this stage of his career.