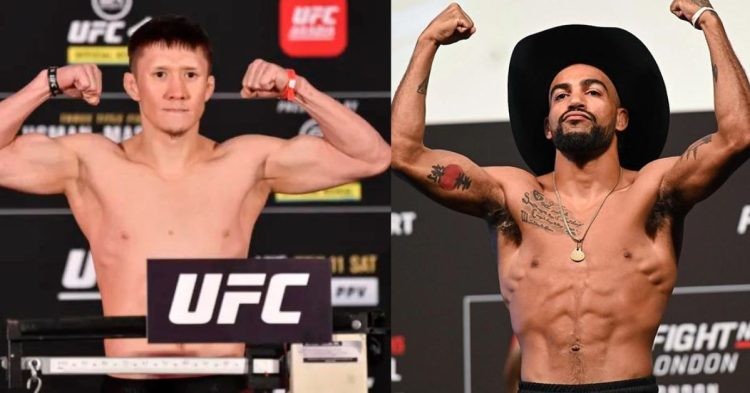 Charles Johnson is set to meet Zhalgas Zhumagulov in an exciting flyweight bout in the prelims of UFC Vegas 65 this weekend. Johnson is 11-3 as a professional but 0-1 in the promotion. He is coming off a loss to Muhammad Mokaev in his debut fight. Despite his loss, Johnson displayed an amazing skillset in his last fight and showed that he can definitely take on the top contenders.

On the other hand, Zhumagulov has a professional record of 14-7 and fought 5 times in the UFC. Unfortunately, he lost the majority of the fights and currently is 1-4 in the promotion. This does not mean that Zhumagulov is not a good fighter, as he has fought some of the best fighters in the division, but lost by decisions. Both of the fighters are unranked and will be looking to pick up a win this weekend.

Going into this fight, Johnson will have the size and reach advantage over his opponent. He is very tall for a flyweight and will certainly find some success with his height. Apart from his size, Johnson is also a well-rounded fighter. He has very good cardio and possesses some amazing skills to be a problem for his opponent.

Johnson also has wonderful takedown defense and good grappling. In his fight with Mokaev, he defended 50% of the takedowns. This is pretty amazing, given the fact that Mokaev is an elite wrestler. Johnson has the power in his hands too and combined with his size, he can find early success in standup.

Meanwhile, Zhalgas Zhumagulov is also a very good fighter. However, his recent losses have put him in a tough spot. He fought some talented fighters but fell short in the judges’ scorecard. Zhumagulov tends to fight aggressively and uses his slick striking to close distance and inflict damage on his opponents.

Johnson will enjoy his reach and size advantage over Zhumagulov. Also, Johnson’s powerful strikes and takedown defense can be a game-changer in this upcoming bout. I believe this fight will be a close one and once again Zhumagulov will face a decision loss.

However, Zhumagulov is 1-4 in the promotion and I expect him to get desperate to get a victory. Both of the fighters are pretty good in the striking department. Zhumagulov is an aggressive striker and a good wrestler. On the other hand, Johnson is a powerful and tall fighter with defensive grappling, which will be a key to victory for Johnson.