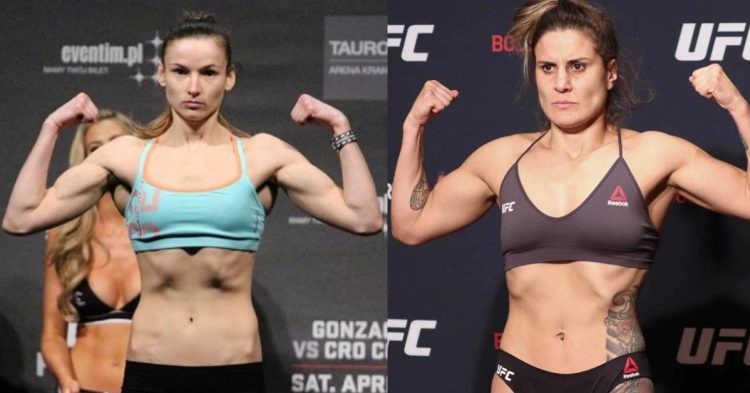 UFC Vegas 65 will see Jennifer Maia taking on Maryna Moroz in the prelims. Maia has a professional record of 19-9-1 and is coming off back-to-back losses from Katlyn Chookagian and Manon Fiorot. Maia is 2-3 in her last five fights and this weekend she will be looking to get a dominant win and rebound from the losses.

On the other hand, Maryna Moroz is riding an impressive three-fight win streak and is 11-3 professionally. She is coming off a submission victory over Mariya Agapova and has not lost a fight in nearly five years. This fight is surely going to be fireworks.

Jennifer Maia is a pretty good fighter but since losing to Valentina Shevchenko nearly two years ago, she has only won one fight. Maia is 4-5 in the promotion and coming off a defeat. The Brazilian needs to pick up a win soon and I believe she will get desperate in her fight this weekend.

Maia fought nine times in the UFC; however, she needs to improve her game if she is looking to end her losing skid. Unfortunately, there is not much for Maia in her upcoming bout. Her opponent has shown superior skills both on the feet and ground. Apart from that, Maia has shown difficulty in fighting taller opponents.

On the other hand, Maryna Moroz will enjoy a significant height and reach an advantage over Maia. The Ukrainian has also fought nine times and has amassed an overall record of 6-3 in the promotion. Moroz is not only a very skilled striker but a dangerous grappler as well.

Moroz also has a big gas tank and knows how to utilize her long reach to keep her opponents at bay. She is a very good technical fighter and also mixes up her attacks well. Moreover, Moroz has superior grappling, so wherever this fight goes, I believe Moroz is equipped well enough to outpoint her opponent.

As mentioned earlier, Moroz is the bigger fighter here and Maia struggles against bigger opponents. Adding to that, Moroz has phenomenal kickboxing skills and often goes berserk if she manages to corner her opponents against the cage.

Moroz has all the weapons in her arsenal to deal with Maia. However, the same cannot be said about the Brazilian. If Maia fails to adapt to this fight, then she will face another defeat, which is most likely. I believe Moroz will outstrike Maia and if she does not finish off her opponent on her feet, she will drag her down to the mat to hunt for a submission.