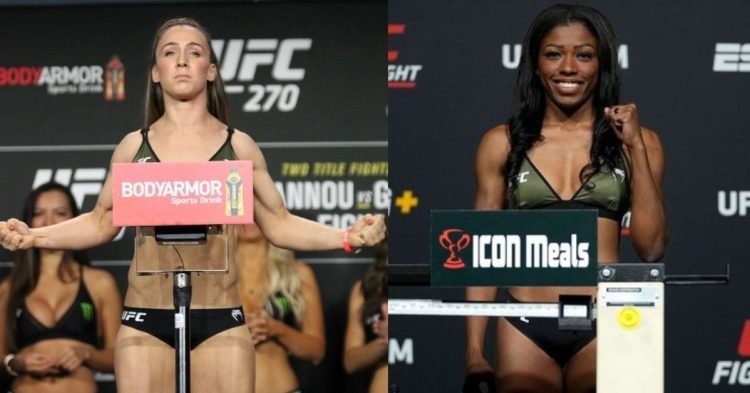 Vanessa Demopoulos will take on Maria Oliviera in the prelims of UFC Vegas 65. Demopoulos has a professional record of 8-4 and is 1-3 in her last four fights. Despite the losses, she has shown her capability of finishing a fight. She submitted Silvana Gomez Juarez and outpointed Jinh Yu Frey this year.

Meanwhile, Maria Oliviera lost her UFC debut to Tabatha Ricci. However, she has 7 KO wins as a professional and her record stands at 13-5. Oliveria is a dangerous striker and outpointed Gloria De Paula. Both fighters will be looking to pick up a win this weekend.

Vanessa Demopoulos is an average striker but is a skilled submission specialist. However, she is a very poor wrestler and has many holes in standup. Demopoulos has weak standup games, however, she has a powerful right hand.

On the other hand, Maria Oliveira is a ferocious brawler. She often uses her sharp Muay Thai skills to stun her opponents, followed by relentless powerful strikes. Oliveira has dangerous striking and her flying knees can be a problem for her opponent.

However, her weakness lies in her pressure-fighting style. She often marches toward her opponents without defending her body. She is durable enough for Demopoulos, but, her lack of ground skills can be an issue in this fight.

Oliveira will enjoy a significant height and reach advantage in this bout. She is also a dangerous striker and given her size advantage, she can keep her opponent at bay while inflicting significant damage. However, Demopoulos is a solid grappler and she will try to close the distance and get past Oliveira’s long reach.

I expect Demopoulos to attempt multiple takedowns and given her wrestling, she can control Oliveira on the ground. Oliveira needs to defend the relentless takedown attempts and piece up Demopoulos from the outside. But, I believe Demopoulos’ wrestling will be too much for Oliveira, and at some point, she will hunt for a submission, which might end the fight.